The Aspinall Foundation is embarking on one of its most exciting projects to date. 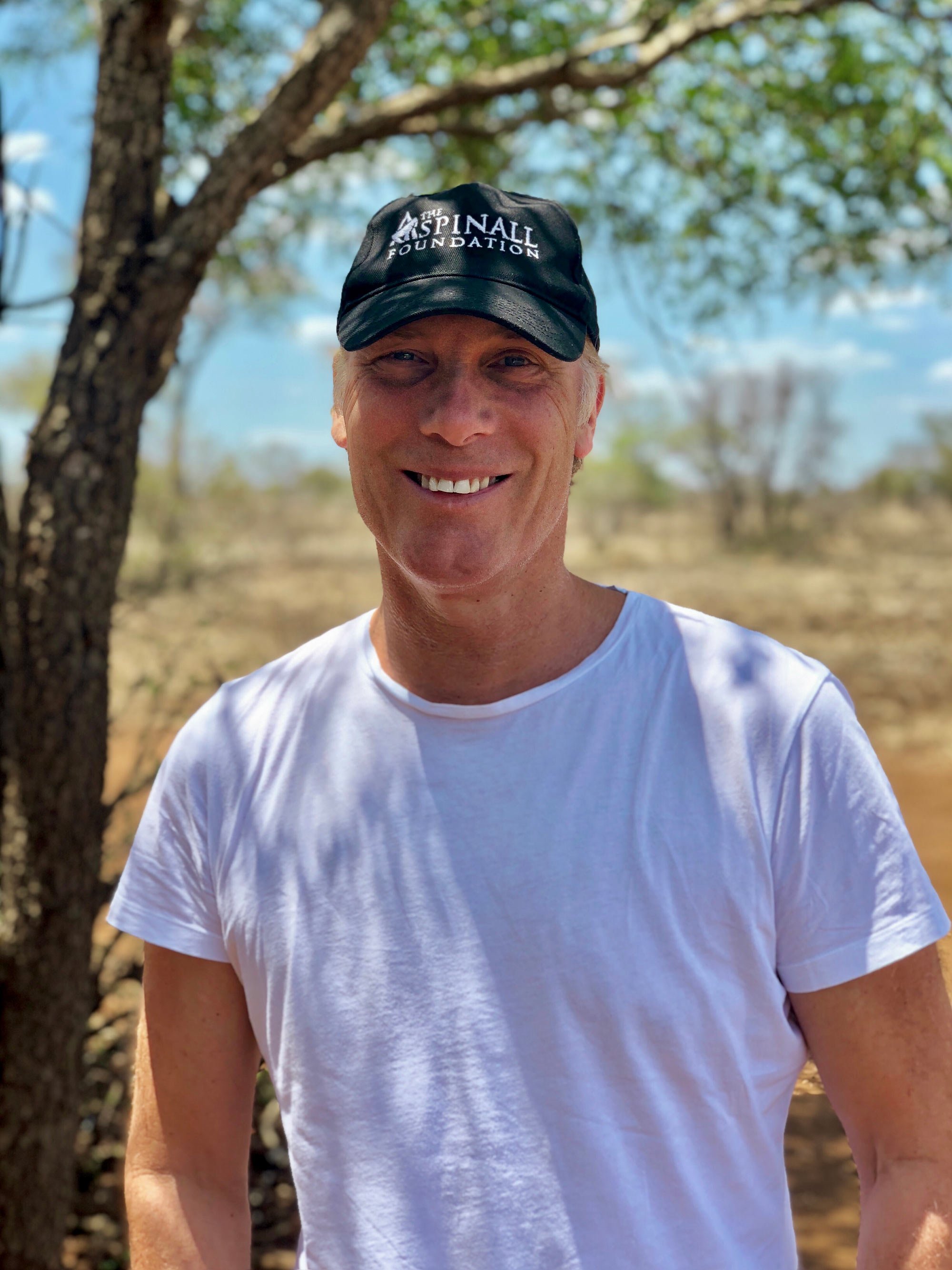 The Aspinall Foundation is always looking for new ways to give the captive animals in our care a better life and, if possible, a chance to live where they belong - in the wild. So, to this end, I am currently halfway through a whirlwind tour of several possible sites in South Africa.

When I say whirlwind I don't exaggerate, we have driven 2000 kms in the first 3 days as well as hours spent exploring the reserves on dusty roads and rocky terrain.

Working with an incredible like minded organisation called Elephants, Rhinos and People (ERP) who believe that elephant and rhino populations can be saved by helping to alleviate poverty in rural communities in Africa, TAF is embarking on one of its most exciting projects to date.

The plan is to find a suitable environment for as many species that we currently hold at Howletts and Port Lympne as possible (as well as species we could send in the future).

These include various species of megafauna; cheetah, various antelope, small cat species and others. Not only will these animals have a vastly better quality of life, but their journey to freedom will give the reserves a good story to tell visitors and a chance to increase revenue for the local communities.

As with our pioneering projects in Congo, Gabon, Java and Madagascar our primary goal is the reintroduction of the animals in our care but, equally important, is the restoration of the release sites to their original state. Currently, all the sites we have visited have been degraded by overgrazing and hunting. By re-populating them with species such as elephant (that would have otherwise been culled) it is a win win for the communities and wildlife.

Our South African project will be different because we will be working in collaboration with the first owners of the land, who were forcefully evicted and dispossessed in the middle of the last century. Rather than flood the sites with cattle these landowners will partner with us in restoring the fauna and flora and share in the profits from any tourism that this investment yields. Reintroduction as a conservation tool!

At Johannesburg we are met by the director of ERP, Dereck Milburn. Dereck is an expert at restoring degraded habitat by collaborating with rural communities and local government. His office is effectively his car, racing from one project to another all the while coordinating elephant rescues, anti-poaching missions and rhino protection, he never sits still.

Dereck drives us east to Dullstrom where we spend the night. The next morning, we head north east for 2 hours to a 7500 hectare ex hunting farm called Mabelane. Bisected by a meandering river, bordered by tree covered hills, this is perfect elephant country - with no elephants! The hunter who owned it had shot everything when he realised that he was going to lose his farm. I instinctively don’t like him and refuse to shake his hand, glad that in less than a month his farm will be returned to its rightful owners. 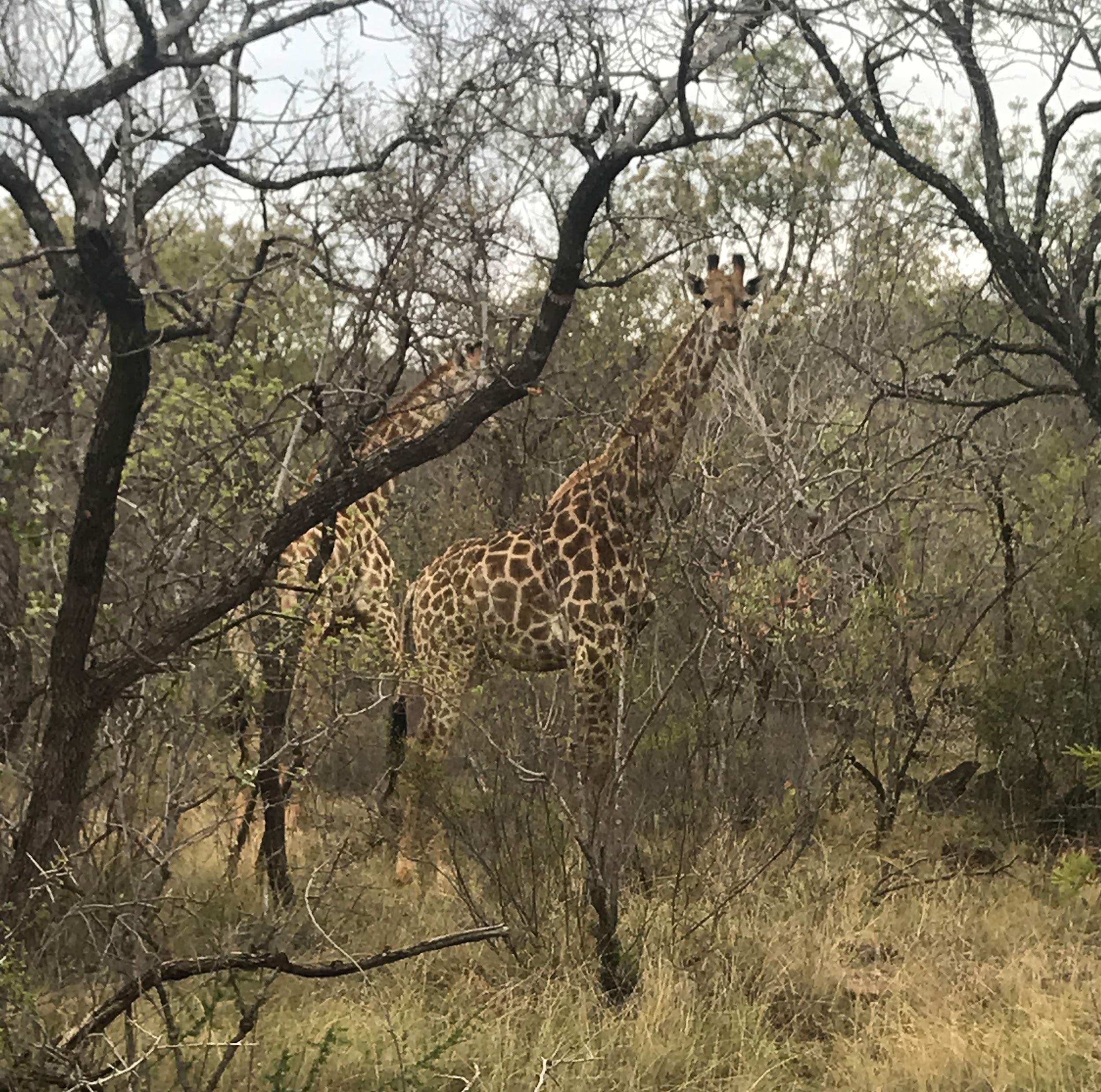 One possibility could be to transfer wild elephants, which have come into conflict with human populations, from overcrowded areas in other parts of the country, to the site. There were many options for captive animals from the parks too. Dereck thought we could triple the size of the area to around 20,000 hectares if we wanted to, it seems perfect.

Leaving Mabelane, we drive 3 hours north east to the Selati Olifants reserve (roughly 4500 hectares) bordering the magnificent Kruger park. The reserve’s position on the aptly named Olifant river is jaw droppingly beautiful and filled with crocs and hippos, we see a large herd of elephants on its banks, with baboons running around between their legs. The site will provide a much needed expansion of elephant territory, for the densely populated southern area of the park and ensure we can protect free roaming elephants in the area, as they are currently crossing roads and getting knocked over. Again, ideal elephant country. 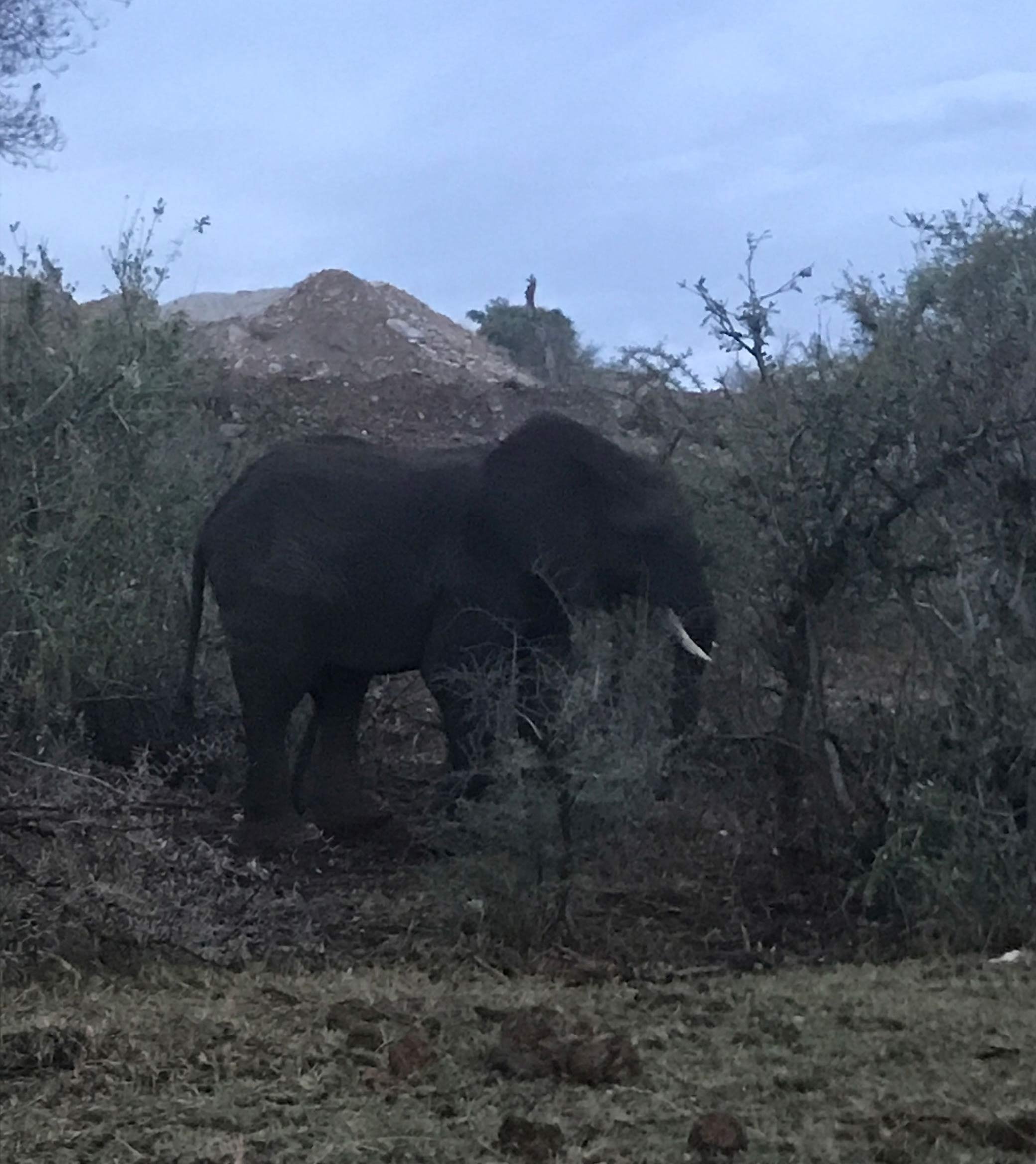 We leave the reserve in the late afternoon, driving 2.5 hours north of Selati Olifants to Silonque camp where we spend the night. We spend the whole journey discussing the endless variables of each site (best topography, best grazing, best location etc).

We get up early and travel 4 hours to the third site called Masebe, a 6000 hectare community owned reserve, with the potential to join up to a 32,000 hectare reclaimed farm. It consists of a series of picturesque cliffs, with parallel grassland valleys. We saw some of the earliest bushman cave paintings ever found in South Africa, including some of the earliest known representations of rhinos by man.

Exhilarated, we drive back to our host and CEO of Group Elephant, Jonathan Tager’s house in Mabula game reserve.

We awake early and take in the stunning view from the house, as well as several rhinos

gorging happily below on grasslands, in the savannah in front of us. Then a quick coffee and 2.5 hours drive to a national reserve called Madikwe 65,000 hectares of plains grasslands dominated by a line of hills cutting through the centre. ERP are adding 10,000 hectares to the reserve and there is a possibility of adding another 40,000 hectares. The hills gradually tapered off into a large lake. This could be a perfect home for any number of species and is crying out for restoration! 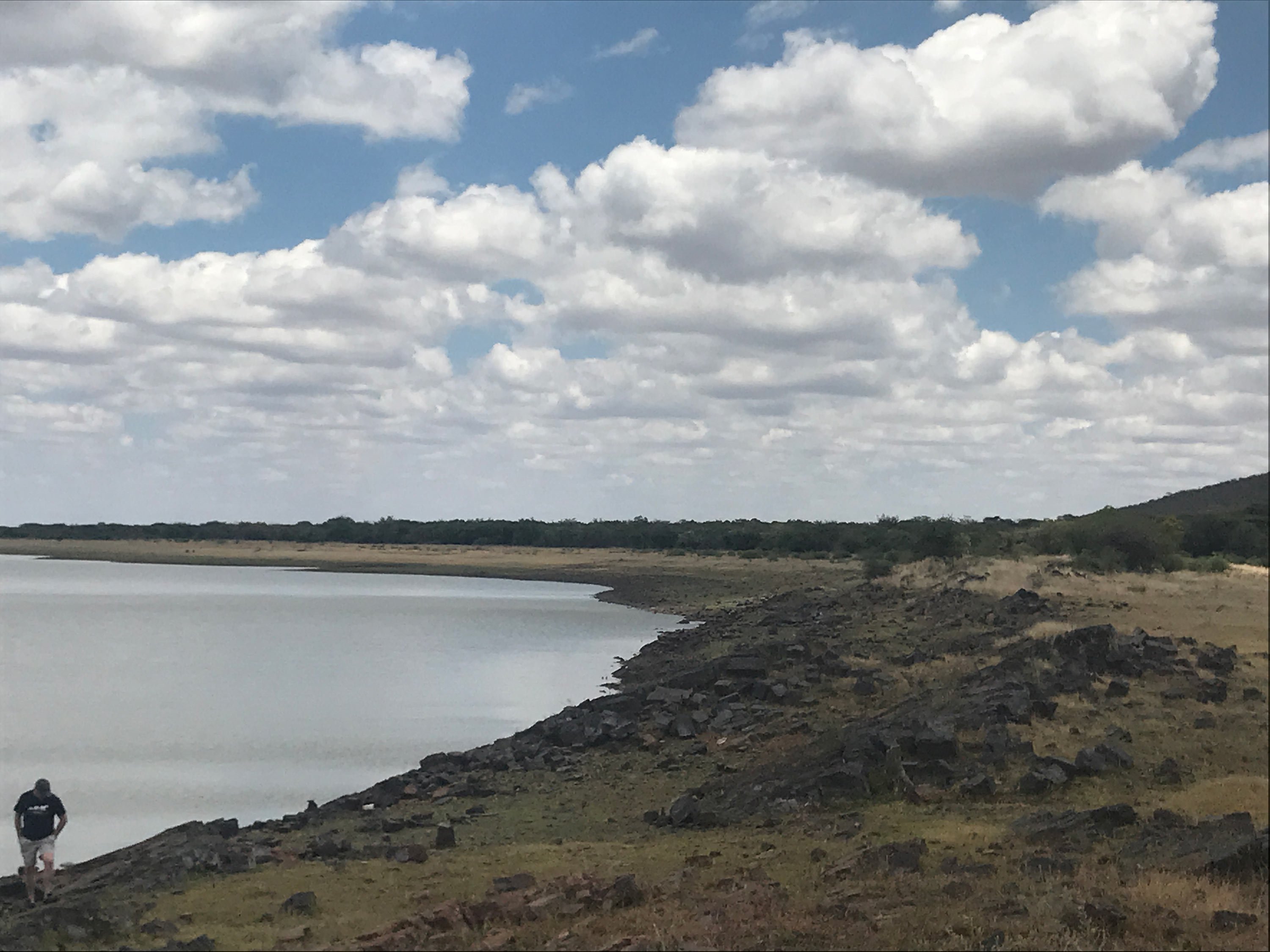 Luckily, ERP have been hard at work securing another 10,000 hectares to add to the reserve in phase one and another 10,000 hectares planned for phase 2. We brainstorm ideas while we drive around the enormous lake, which species would be suitable? Soft release or hard release? How big would their rehabilitation bomas need to be?

Each of the different sites we saw had their own attractions but there were so many variables that we had to bear in mind.  The choice for which site to commit to made our heads spin! And we still have another possible site to see.

We drive back to Jonathan’s house on a high from our exciting day.

After breakfast, we drive 3 hours to a cheetah centre near Pretoria to discuss reintroduction strategies, with an organisation that has had a lot of experience breeding captive cheetahs.

We learn that captive cheetahs have been successfully reintroduced to reserves in South Africa, and the last group of captive animals defied expectations by making their first kill 3 hours after being released!

We drive 45 minutes to a small reserve (4000 hectares) near Pretoria, called Rietvlei. ERP have been bolstering the state protection of this small park for 2 years with drone surveillance and anti-poaching units.

There have not been any incursions in the reserve since they started working here and we are given a demonstration drone flight to show us why this is so.

The drone is equipped with all sorts of state of the art surveillance equipment and the control room is like NASA! The drone flies day and night, keeping an eye on the small but important rhino population.

Dereck also introduces us to Derek van der Merwe from the Endangered Wildlife Trust (EWT) who run the breeding programme for cheetahs in South Africa, as well as being the leading experts on cheetah reintroduction.

Derek and his brother Vincent, give us a detailed breakdown of cheetah conservation in South Africa and we discuss possible placement for the 14 confiscated cheetahs that my team helped save last month and had further discussions on reintroducing Howletts and Port Lympne cheetahs.

The discussions were very positive and left us feeling very hopeful.

EWT also have an amazing record reintroducing painted dogs across Southern Africa. They recently reintroduced a large pack to a national park in Mozambique. I was very impressed by EWT’s optimism and energy and I look forward to working with them in the future.

We fly to Port Elizabeth, then drive 2.5 hours to Samara game reserve - a stunning 13,000 Hectare, privately owned, 5 star reserve in the Great Karoo region of the Eastern Cape.

Samara is a reintroduction pioneer, home to the first herd of elephants to have been reintroduced to the area for 150 years as well as black rhinos and cheetahs. These magnificent species will soon be joined by lions.

Excitingly, they are exploring the option to add another 14,000 hectares and include a wildlife corridor to a mega reserve in the south.

The Tompkins family have devoted over 20 years to building this haven and the results are awe inspiring. With luxury accommodation, incredible service and delicious food, it has everything you could wish for.

We meet Prof. Graham Kerley, one of the country’s leading elephant experts. He outlines the current status of the elephant population in South Africa and the problems that these majestic creatures face. After two days of exploring and being hosted by Sarah Tomkins, we left for a couple of relaxing days at Singita, to give us time to make our decisions.

In summary, after travelling 2700km by road in less than a week, we saw 5 potential sites to restore. Together, with our partners in ERP we will have to choose 1 of 5 sites. based on the many variables that we had to consider (e.g. location, carrying capacity, infrastructure, sustainability etc).

Mabelane: Currently 7500 hectares, with an expansion potential of up to 20,000 hectares.

Perfect habitat, location is slightly problematic and restocking prey species could be expensive.

Selati Olifants: Currently 4500 hectares. No expansion area but links to Kruger and its Association of Private Nature Reserves. Needs to be secured, to ensure we can protect free roaming elephants in area, as they are currently crossing roads and getting knocked over. Again, perfect habitat but bordering Kruger, so restocking might be made easier by taking fences down.

Masebe: Currently 6000 hectares and Moepel Farms is 32,000 hectares. By linking them we could create an area of 38000 hectares. Visually stunning and good elephant territory but difficult terrain for cheetahs.

Madikwe: Currently 65,000 hectares with our current expansion area being 10000 hectares.

We can further expand the area around Molatedi Dam. 40000 hectares. Perfect cheetah territory and potential to expand elephant habitat. Needs restocking but next to a well stocked reserve (less pressure than Kruger). Tourism potential is untapped in our area. Beautiful views. 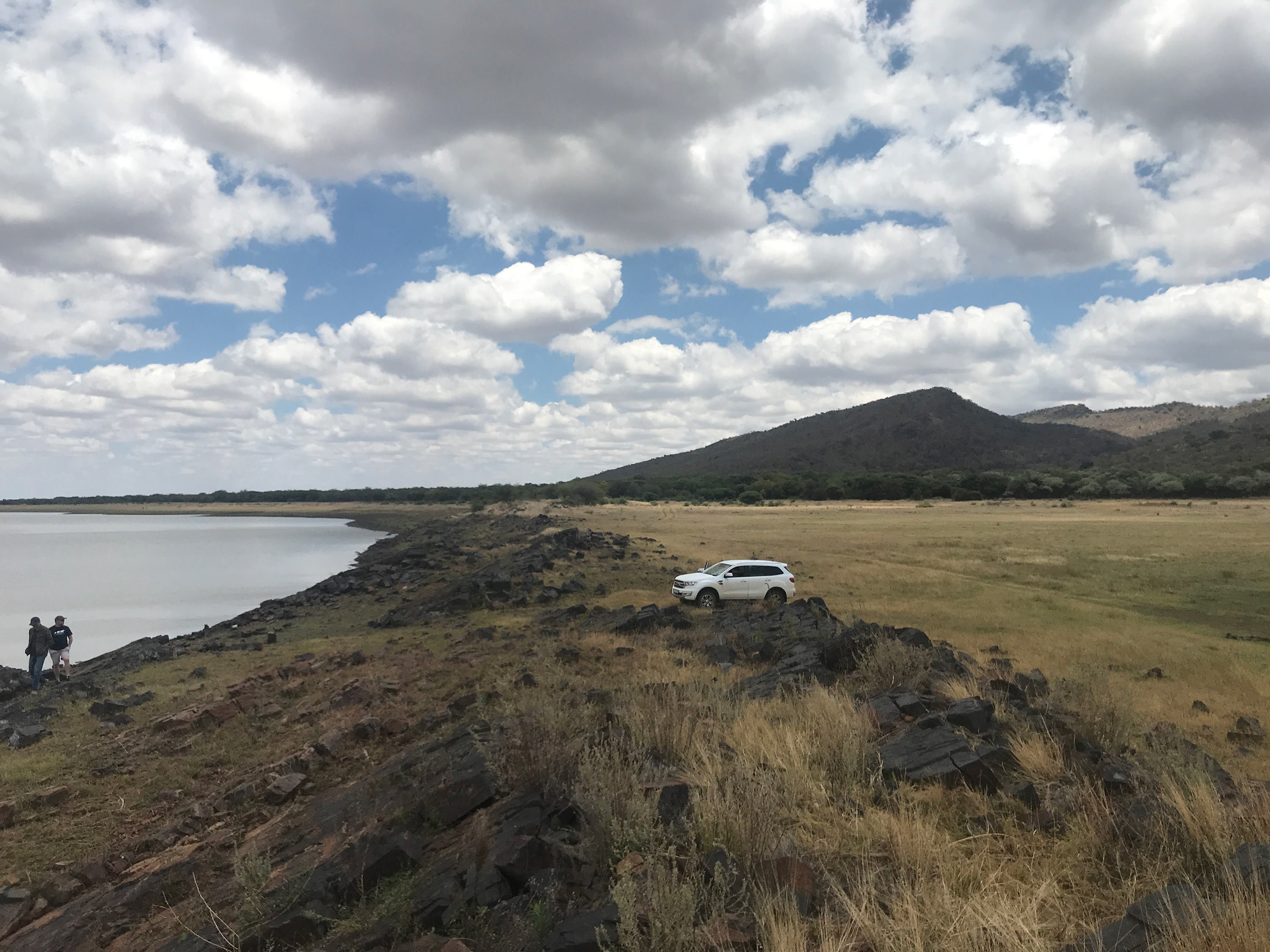 Samara: Currently 13,000 hectares which can be expanded by 14,000 hectares and then further expanded by corridors into a mega reserve. Visually incredible and experienced game reserve management with the Tompkins family. Carrying capacity and threat to cheetahs by lions could be issues.

It’s going to be a difficult decision but so exciting and so much potential, I am going to have to brief my team when I get back to the UK.