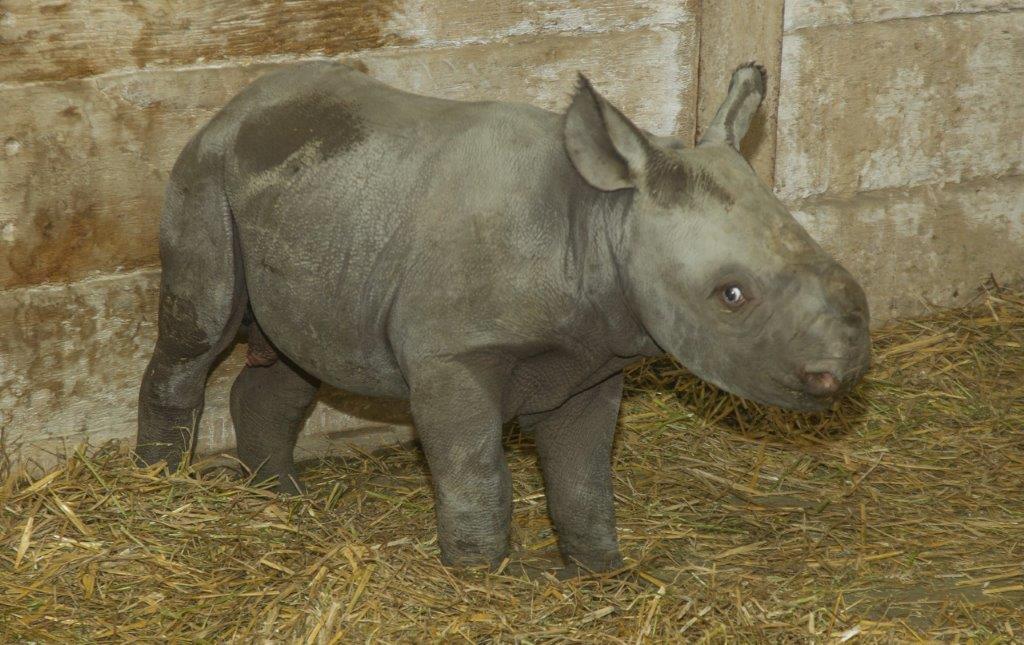 Port Lympne Reserve, near Ashford, is celebrating a milestone birth with the arrival of a fourth generation, baby black rhino.  The adorable addition to the Reserve’s crash of black rhino, cements Port Lympne’s reputation as the UK’s most successful breeding sanctuary for this critically endangered species.

Expecting the birth, the keeper team set up CCTV cameras in the rhino bedrooms, to ensure they captured every moment.

Paul Beer, Head of Rhino Section added: ‘This is Kisima’s first calf and for a first-time mother, she’s taking it all in her stride.  As with all births, we were naturally cautious, so we set up CCTV cameras to ensure we could keep an eye on progress.  The birth went really well and it’s always rewarding for the team to watch such special events.’

The three-week-old calf, born on the 5th January this year, to first time mother, Kisima, is the fourth generation of black rhino at the wild animal park.  His mother, grandmother and great grandmother were not only born at the Reserve, but are also still resident.

Simon Jeffery, Animal Director said: ‘We are absolutely thrilled to welcome this latest arrival to our black rhino herd. He’s strong, healthy, playful and curious. It won’t be long now, before he’s ready to venture outside.  The birth is particularly significant for us, as his mother, grandmother and great grandmother were all born here, which means that we are actively helping to save and protect these incredible animals.’

Port Lympne, part of the world leading conservation charity, The Aspinall Foundation, famously hit the headlines in 2012 when three black rhinos, began their journey from the wild animal park in Kent back to the wild, with a visit from HRH Prince William.  Two of the rhinos have successfully given birth in the wild, at their home on a heavily protected reserve in Tanzania.

Simon added: ‘This youngster is not only significant for us but also for the species.  Black rhino are critically endangered and have been teetering on the brink of extinction in the wild as they are poached for their horn, which fetches colossal amounts on the black market in Asia.  We are part of a vital breeding programme designed to save this incredible species and every birth brings hope whether that’s in protected reserves in the wild, or right here at home.’