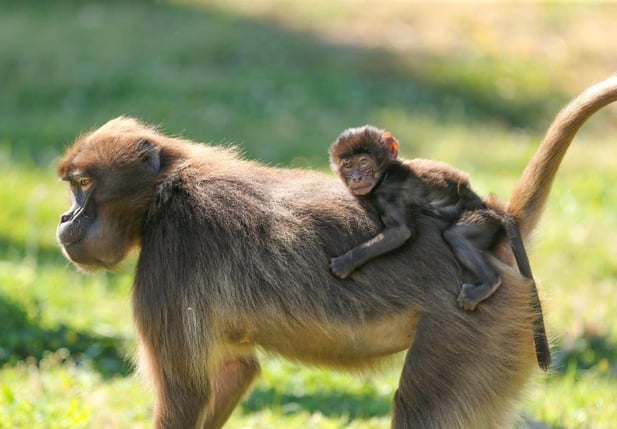 Primate keepers at Howletts Wild Animal Park, near Canterbury, have announced the birth of a baby gelada.

The youngster is already venturing out and exploring in the open topped habitat that the primates share with the black and white colobus.

Matt Ford, Animal Manager said: ‘This youngster is already strong and adventurous. We often see his Mum holding on to his tail, to stop him disappearing or causing too much trouble.’

Howletts is home to a group of nine geladas.  These primates, although often referred to as a baboon, have their own genus and are not classed as true baboons.  They are the last surviving species of a once widespread group of grass grazing primates.

Matt added: ‘Gelada are native to Ethiopia, and are often found in large groups, grazing on the high plateaus.  Although they are listed as Least Concern on the IUCN Red List of Endangered Species, their numbers are in decline due to habitat loss.’