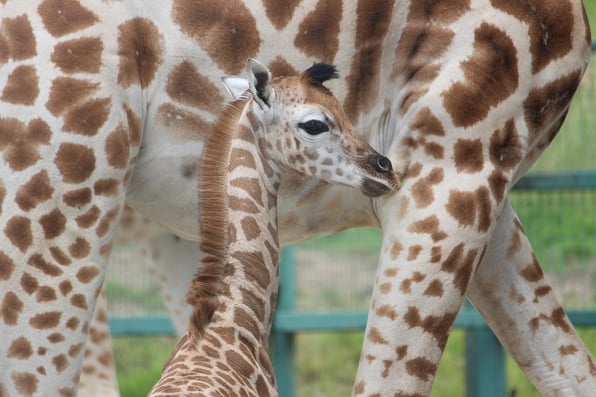 With less than 2500 mature Rothschild giraffes left in the wild, Port Lympne Hotel & Reserve are once more celebrating a giraffe birth; this time a female calf on Friday 15th June at the popular visitor attraction.

This is mother Lunar’s second calf to be born at Port Lympne and sired by father, Valentino.  Following the birth of a male calf, almost exactly a week earlier, the Reserve’s herd now numbers 10 individuals.

Arriving hot on the heels of last week’s birth, the wait has been no less intense for the expert keepers, as the gestation period for a Rothschild giraffe can last up to 460 days.

The incredible journey has been shared globally thanks to a live camera feed straight from the Giraffe House to the Reserve’s Facebook and YouTube pages providing extraordinary access to this very rare occurrence. At its peak, over 1000 people across the world simultaneously tuned in to the live YouTube feed and the amazing unobstructed view of the birth has now been watched over 50,000 times on Facebook.

The adorable infant will join 9 other giraffes at the popular Kent-based Reserve, including 6 of the Rothschild sub-species.

Animal lovers tuned in across the world as, less than hour after her delivery, the giraffe calf took her first tentative steps.

Simon Jeffery, Animal Director said: ‘This is Lunar’s second calf and, although she is slightly smaller than our male calf, she already stands over five feet tall! Although it’s early days, she is suckling well and already starting to explore, under the watchful eyes of both Lunar and Lehana.’

The Reserve is now appealing to giraffe fans everywhere to help raise funds to build a giraffe nursery at the Reserve.