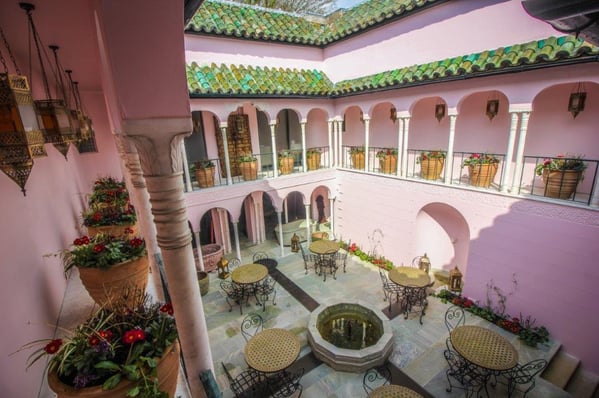 Port Lympne Hotel and Reserve, one of the UK’s fastest growing luxury break destinations, is re-opening its gloriously evocative Moroccan Courtyard for guests, following a lavish restoration bringing the courtyard back to its original 1920’s glory.

Unique in the UK, the courtyard was designed by Sir Philip Sassoon, the baronet and Conservative MP for Hythe, who created Port Lympne mansion which is now the boutique four star Hotel at the heart of the Reserve.

The renovated Moroccan Courtyard will be opened on Friday 20 April at 11am by Damian Collins, the current MP for Hythe who has written a book, 'Charmed Life', about his flamboyant predecessor.

The historic mansion and its courtyard were the setting, during the Great Gatsby era of the 1920’s and 1930’s, for exotic parties for Sassoon’s many influential and esoteric friends. The Prince of Wales and Wallis Simpson, Winston Churchill, Lawrence of Arabia and Charlie Chaplin were among the many who partied with their host.

Now, after falling into disrepair after World War II and being inaccessible for the past 30 years, the Moroccan Courtyard has been restored by Port Lympne Hotel and Reserve owners, Damian and Victoria Aspinall.

Under the direction of Victoria, as head of design, the team at Port Lympne has lovingly restored the courtyard’s original features including its vast marble flooring, pillars, picturesque octagonal fountain, baths and balcony.

Original features, such as the bespoke roof tiles, have been carefully recreated by local artisan potters to mimic the original architecture, while antiques for the renovation have been hand-picked from Marrakesh.

Victoria Aspinall said: “The Moroccan Courtyard is evocative of another era, a stunning vision of Moorish culture sitting at the heart of a glorious English landscape. It is an amazing part of the Port Lympne’s aesthetic heritage and we have remained faithful to its original unique design.”

The renovation of the Moroccan Courtyard is part of a spectacular extension of Port Lympne Hotel and Reserve, which is unveiling a spectacular new range of accommodations including Giraffe Manor, a 20 bedroom luxury hotel where giraffes will give guests an unrivalled close up view of these most majestic creatures.

Following the runaway success of its acclaimed Tiger, Rhino and Bear Lodges,  the hotel is also announcing its multi-million pound investment in brand new and bespoke, Lion Hall and Wolf Lodge accommodation and a second Tiger Lodge, all opening this summer.

Each new accommodation will blend safari chic with fabulous comfort and style and a unique ability to get up close to some of the planet’s most magnificent animals.

Also coming this year is the Bubble at Port Lympne, a fabulous bubble pod in which visitors can observe the wonders of the sky at night over the Reserve.