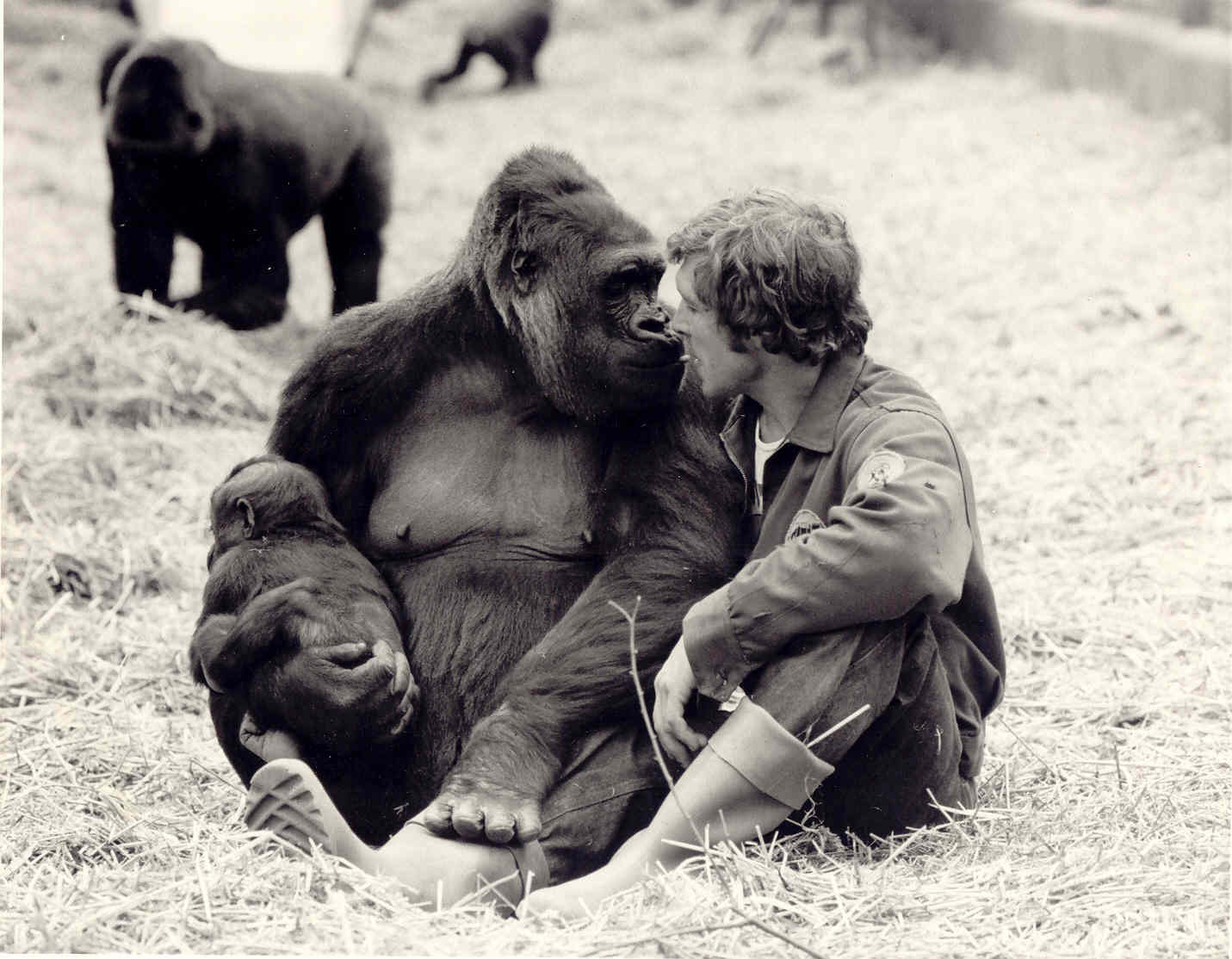 I suppose we all knew it was just a matter of time given her grand age of 57, nevertheless the news of Baby Doll's passing is truly heart-breaking. For the last hour or so I have been browsing through countless photographs and watching old footage of the 'rough and tumble' gorilla play-times we enjoyed during those memorable early years at Howletts and looking back I consider myself so lucky and privileged to have experienced such an era of which I have so many fond memories.

Originally named Yaounde, she had been re-named Baby Doll, because she constantly sucked her thumb. A habit she still occasionally practiced when I first took over the gorillas in the summer of 1969, even though at that time, she would have been about 8 years old!

Though always a tomboy character, Baby Doll was also a bit of an outsider and seemed locked in to her own little world, sharing it most frequently with the timid 3 year old male Mumbah, whilst the other members of the original six - namely Shamba 10, Mouila 9, JuJu 7 did their best to cope with the unpredictable Gugis, a 10 year old male, who I have to say was probably the most dangerous gorilla I ever worked with, and who's escapes were eventful to say the least!

Baby Doll often showed her metal when confronted by him during one of his bullying moods, particularly when little Mumbah was at risk, and would be quickly and loudly supported by the others....and so it was that the two gorillas I initially focused on were Mumbah and Baby Doll, and rewardingly my time spent led to close bonds being established between us.

Mr A wrote in his book 'The Best of Friends' 'Richard Johnstone-Scott has a special attachment to Baby Doll and I would hazard a guess that she runs a close second to his wife in the race for his affections'. Very true though sometimes Baby Doll's affections towards me could prove a little difficult especially when she came into oestrus...despite keeping records of all the females' respective cycles I occasionally miscalculated and more than once found myself on entering her den to clean out immediately pinned to the wall or mesh by her ample backside as she presented to me. Lips tucked and uttering a high a pitched trilling she would then proceed to ram herself repeatedly against me, until in frustration she would shoulder barge me aside....it was a fixation that never lost its painful passion!

In those early days, the gorillas were often at liberty either accidentally or Mr. A. would decide to let them out for a walk!...and I have a vivid picture of Baby Doll, always the last to return to the complex, hanging 'ape-like' by one arm from a decorative lamp position over the front door to Lady O's cottage whilst the others satisfied themselves by plundering the raspberries and strawberries in the walled garden!

Throughout my time with her I was always intrigued by Baby Doll, and the way she conducted herself. She could be a bit of a mystery, an enigma if you like.e.g. she was a large powerful female who could clearly take care of herself, yet it was difficult to place her in the female hierarchy...perhaps I am becoming too anthropomorphic, but it almost seemed that position or rank was unimportant to her.

Baby Doll had never shown sexual interest in Gugis, and yet when Kisoro arrived in November 1973, and had been successfully integrated with the females I remember Mr. A. scoffing when I told him that she seemed encouragingly interested in the new silverback...'She's a cast iron virgin Richard and probably always will be'. But then of course in 1975 Howletts Year of The Gorilla, all four females gave birth! Sadly, Baby Doll's male infant Kisabu had to be removed for hand-rearing and despite all efforts succumbed at six weeks having contracted a streptococcus infection from his mother, whose vaginal membrane had ruptured a few days before birth, thus setting up the infection. Baby Doll herself was seriously ill but thankfully responded well to treatment and a lot of round the clock dosing and TLC.

In March 1977 a devastating flu type epidemic swept the gorilla colony. One that, on the 24th March tragically claimed the life of Gugis. Brief pm findings - Broncho- pneumonia, circulatory failure giving rise to pulmonary oedema. All 16 gorillas plus the chimps suffered breathing difficulties, high temperatures, severe bouts of coughing, sneezing etc and not surprisingly lethargy and loss of appetite. It was a nightmare, and I thought we might also lose some of the very young in the nursery group.

During this time, in addition to giving the more essential prescribed medication (which to some had to be administered by dart) plus fluids I decided to apply Vic Vapour Rub to help with obvious breathing discomfort. Baby Doll was suffering particularly badly and coughing her lungs up - almost gagging at times. She sat propped up with straw sweating profusely on a shelf and eventually allowed me to smear a handful over her chest and around her nose. Then, whilst licking at it, she suddenly burst into a coughing fit and closing her eyes wrapped her arms around my neck and held me face first against her greasy chest until coughing ceased...I remember that, despite her wretched state, her strength of embrace was almost neck-breaking.

On a lighter note, the other occasion when she decided to 'cuddle' me in such a way, was the mass escape when my friend and colleague Peter left a few connecting internal slides open. The result was total chaos...Peter came to inform me (quite calmly as I remember) that all the gorillas were out but confined to the building as he had remembered to close the corridor safety doors.

When I arrived on the scene, gorillas were everywhere wrecking the place...pipes were broken and there was water everywhere. Light bulbs popped and fizzed, and the kitchen, then situated in the middle of the old building, resembled a bomb site. The large electric cooker was on its side sparking dangerously across the sink, the kitchen windows were cracked, cupboard doors were either off or wide open with contents smashed or bent or  scattered, and in the midst, sat Baby Doll perched on a debris strewn work surface, grumbling contentedly with an arm buried up to the elbow in a large catering tin of honey.

In my haste, I sternly approached her with the serious intention of herding her straight back to a den, but instead promptly skidded on a floor coated with everything from Ribena to cooking oil, and cracked the back of my head on the tiles...livid and in agony I regained my feet unsteadily and confronted her...'Right that's it come on you great lump etc' to which her response was a grumble and a tight cuddle with a honey-coated arm around my neck! Needless to say, she took the tin with her when eventually deciding to cooperate!

Later that same year as the terrible epidemic, Baby Doll produced her second infant. At 6.50 am on Wednesday 25th May, 1977 after a gestation of approximately 268 days I found her outside proudly cradling Kibabu. She grumbled at my approach and according to my notes gulped down three pints of Ribena followed by four pints of Complan!....also Kibabu suckled eagerly and she went on to rear him successfully albeit non too gently! As he grew, she would despite my protests, frequently drag him around by a leg or toss him on to her back when deciding it was time to move, so it's no wonder he became independent at an early age! Kibabu was to be her last infant during my time at Howletts.

Hair plucking was one of her few bad habits and when needs be, she would leave herself sporting a Mohican hairstyle. When Kibabu was still young she would divert her attentions to his head leaving her own hair to grow back.

Clearly, she had a thing about hair and was not averse to grabbing a handful of mine now and then. I remember one morning I was sweeping below a shelf she was sitting on and stooped to pull out some straw...suddenly she leaned down and wrenched me upright by the scalp and held me there in agony until I jabbed the broom-head hard at her chest. Big mistake..In a split second she had snatched the broom away, effortlessly snapped it in half and tossed it back at me grumbling loudly as she did so...she then beat her chest and proceeded to cover me with armfuls of straw!!

Another time, I was sitting on a log next to Mr. A. whilst he was being interviewed on camera. Baby Doll suddenly appeared from behind and yanked me backwards by the hair over the log and out of site much to everyone's hilarious delight. Mr. A. told me sometime later that the clip was shown when he appeared on the Johnny Carson Show in the US...apparently brought the house down!

She was wicked at times but also capable of great affection. Her facial expressions (of which there were so many) said it all. She was also exceptionally smart and stubborn, and her impressive and usually triumphant raspberry blowing was another of her traits, invariably blown with considerable gusto after she had outwitted me, when either trying to retrieve something from her, or trying to shut her in on a cold winter's evening. Many was the time I laid motionless in the snow having sneaked silently into position by a slide handle listening to her breathing heavily in the darkness whilst she listened out for me...once convinced she had moved inside to eat the treats I had left I would jump to my feet and frantically wind the handle at great speed, only to find her still outside staring at me with a bunch of grapes in hand...defeated I would stomp off cursing under my breath as the raspberries rang out through the frosty air....an hour or so later we would repeat the process....and perhaps twice more. In fact, success for me achieved sometime in the early hours was not uncommon!  So many memories of a wonderful gorilla companion.

Since beginning this I found a short article about Baby Doll in the Daily Mail in which it states that Damian had to make the horrible decision of allowing Baby Doll to be put to sleep. Poor chap it must have been extremely difficult for him having known her for so long.

Among his childhood memories he will no doubt recall the day Baby Doll gave him a playful whack in the face. I remember he was very young and not particularly keen that afternoon to join his father and myself in the cage with the females. Anyway, I was instructed to bring him in and within seconds Baby Doll (possibly sensing his wariness) pushed past me and hit him with the back of her hand. Poor little chap his nose burst, blood flowed, and Damian howled in pain. Mr. A was not best pleased. With one arm around Damian I managed to fend off an excited Baby Doll with the other, then suddenly Lady O appeared in the corridor demanding to know what was going on. On her orders I managed to ease Damian out of the cage without gorillas following and into the loving arms of his grandmother who, ignoring his blooded face clasped him tightly to her before whisking him off to her cottage in a serious huff! Mr.A. barely said a word for the next hour.

Clearly it was an experience that was never to quash Damian's enthusiasm for wildlife or for the responsibility of carrying out the intended in-situ and ex-situ conservation work of the magnificent zoo parks his father founded.

Baby Doll was very special to me.