Elephants are amazing!  We know you know this, but did you know all 10 of our fascinating facts about these incredible gentle giants?

1. The BIGGEST fact!
African elephants are the largest living land mammal!  To find a bigger mammal you would have to take to the seas and track down some whales!  Weighing in at a mind blowing 6,350kg (7 tonnes!) and measuring up to 4.2m (13ft), African elephants are an impressive sight on the savanna.

Our own African Elephant bull, Coco, living at Howletts Wild Animal Park is a slightly more diminuative 3,600kg and 2.95m tall, but at only 20 years old he is stilll a growing boy!  Male elephants can continue to grow even into their 50s – in particular their head needs to get wider to accommodate their ever growing tusks. Female elephants don’t grow much taller after their mid 20s but they can continue to grow in length. 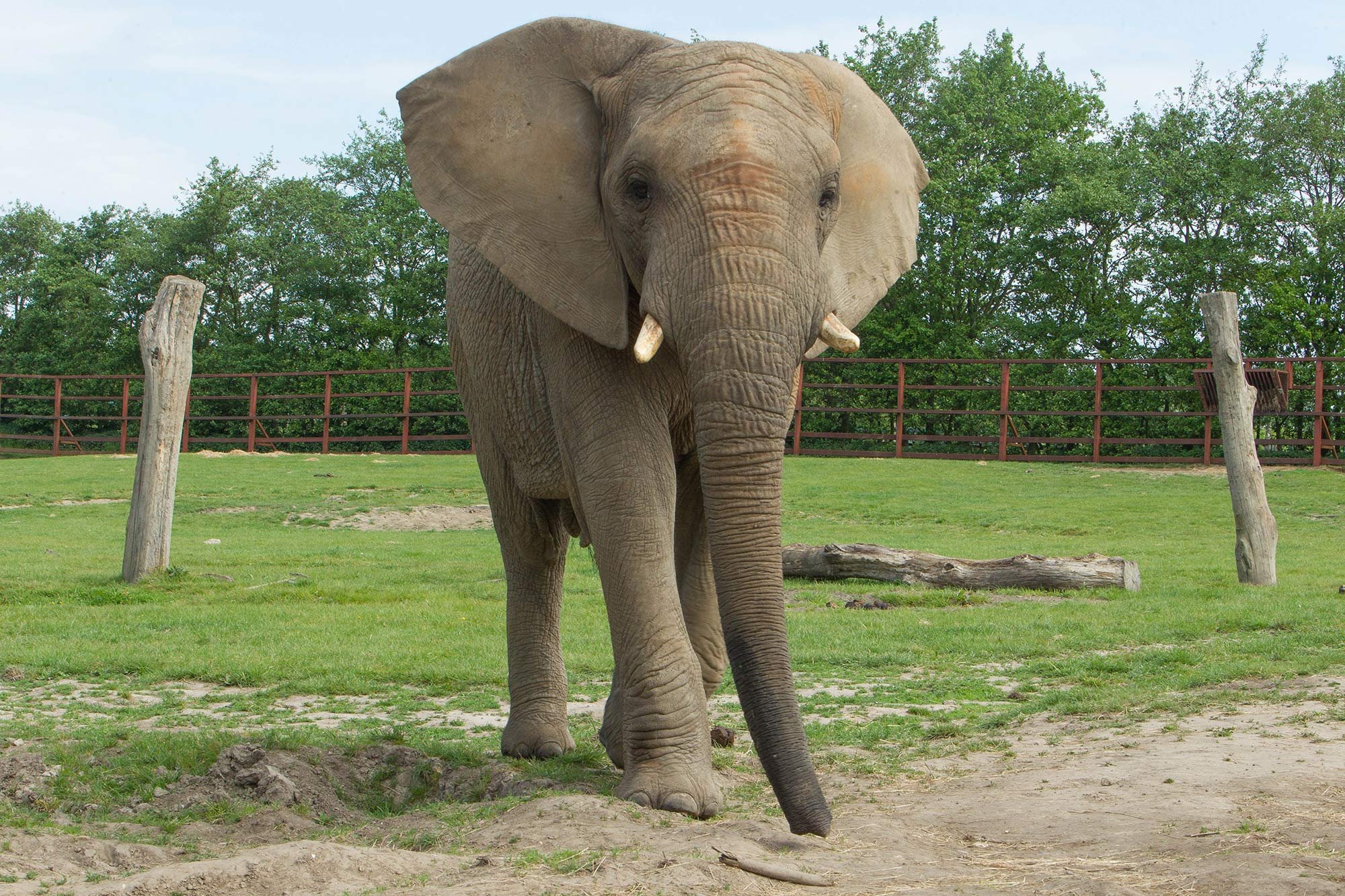 2. Two or three species?
Well, scientists are still arguing about that one so we probably can't call this a solid fact, but we still think it's pretty interesting!  We all know that there are two species of elephants; African and Asian, right?  Wrong!  (Possibly.) As well as the Asian elephant, scientists now believe that there are in fact two species of elephants in Africa; the savanna elephant that we all recognise and the lesser known forest elephant with its straight tusks and smaller stature - perfectly adapted for moving around amongst the trees!

The African elephants you'll see at Howletts are the more well known savanna or bush elephant.  Excitingly, forest elephants have been caught on camera traps and spotted visiting the river at our gorilla rescue and rehabilitation project in Gabon. 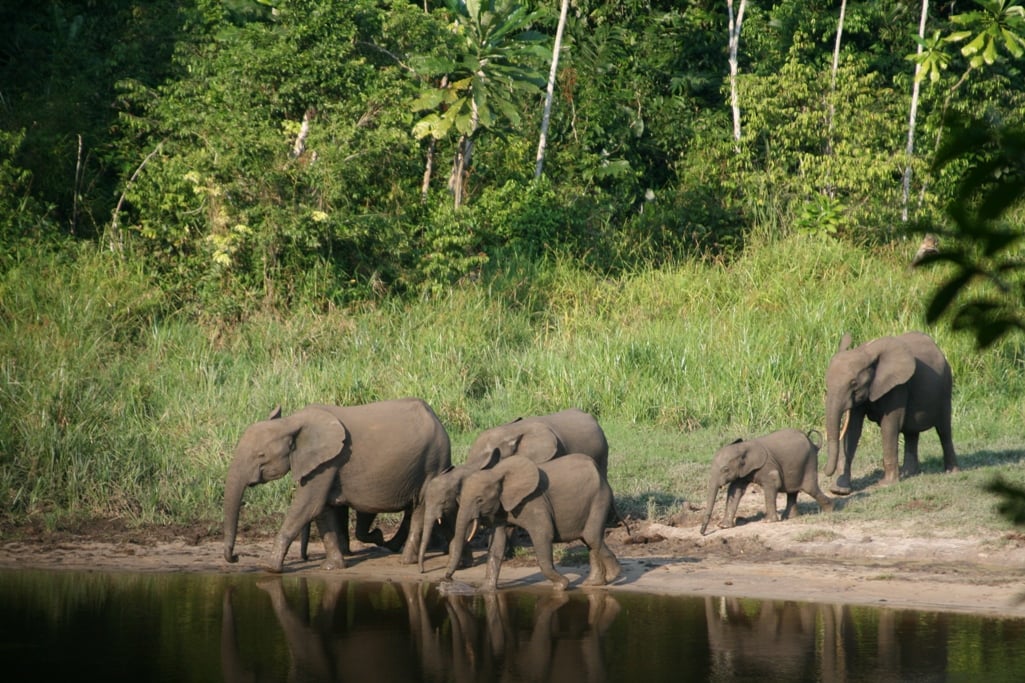 A herd of forest elephants spotted at the river

Check out the graphic below for more tips on how to tell your elephant species apart!

4. An elephant never forgets!
Ever wondered how that saying came to be?  Elephants have amazing long term memories, recognising people and other elephants after many years of absence and remembering where all the best food, watering holes and routes between them are!  Here comes the science bit... an elephant's temporal lobe (the area of the brain associated with memory) is much more developed than a human's!  African elephants can live 60-70 years in the wild so that's a lot of memories to store!

5. Let's talk poo!
Elephants spend 16-18 hours a day eating up to 450kg of grasses, leaves, bark and twigs.  It's no surprise that an animal that can eat that much food every day will produce a huge amount of poo!

An adult elephant's poo weighs around 18kg and they will poo every couple of hours.  One elephant can produce up to 150kg of poo every day.  With the largest herd of African elephants in the UK at 14 individuals, keepers at Howletts Wild Animal Park clear up a staggering 12 tonnes of poo every week! 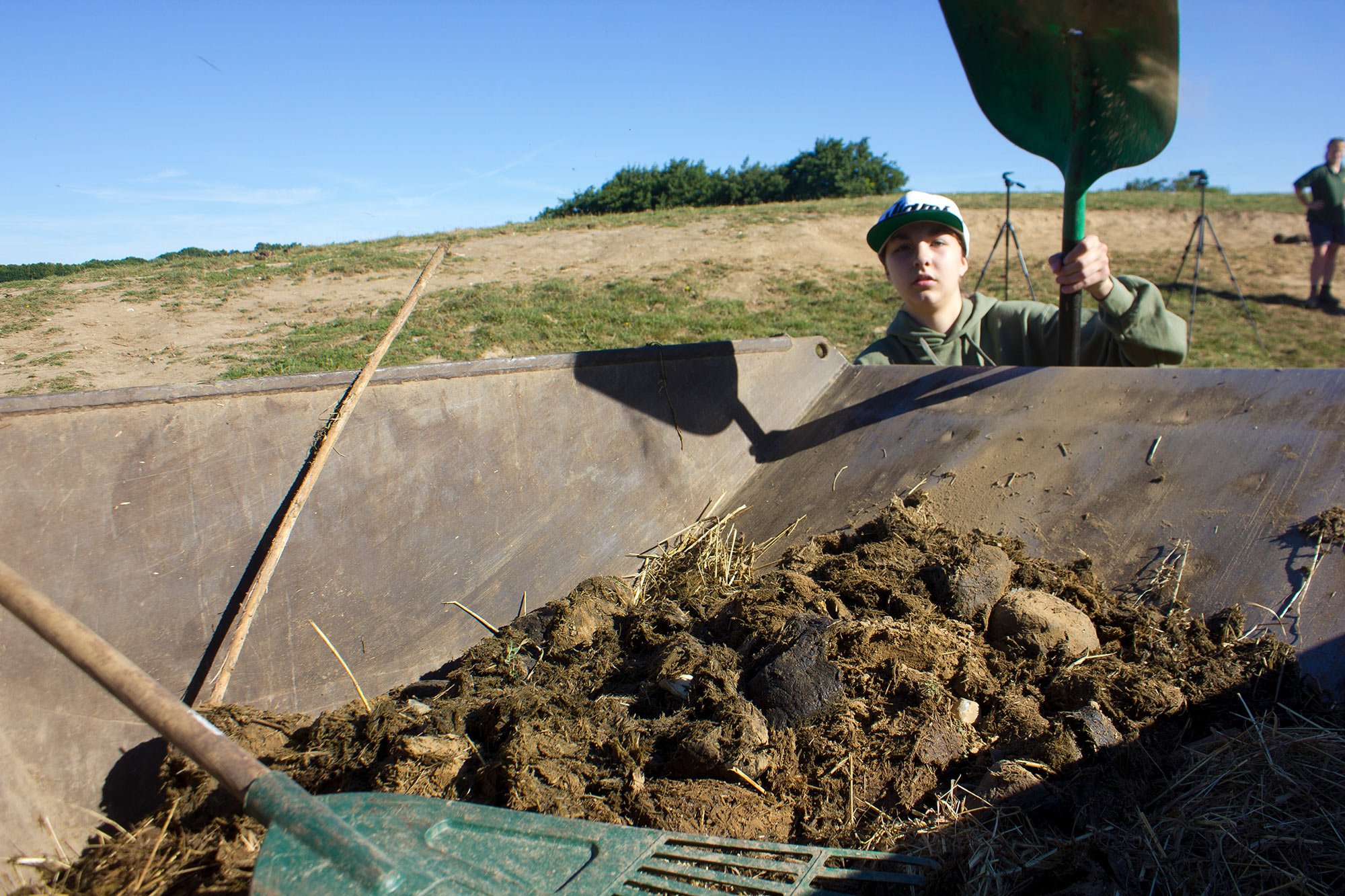 African elephants have much shorter intestines than Asian elephants.  They pass food through much more quickly (as little as 12 hours) and are very inefficient at digesting it.   Around 60%  is wasted....although it’s not really waste – it makes excellent fertiliser and many plants have evolved to germinate better after their seeds have passed through an elephant and been deposited in dung!

6. My, what big teeth you have!
Yes, tusks are actually teeth!  The elongated incisors grow throughout the elephant's life and they use them for scraping bark off trees, digging up tree roots and for defence when fighting.  Elephants can be left or right tusked just as people are left or right handed!

7. Who run the world?
In the immortal words of Beyonce, the matriarch of pop herself: "Girls!"  Herds are led by the oldest female (or cow), also known as the matriarch.  The matriarch will lead the herd along routes she learned from her predecessor and assist the females with raising their calves.  When she passes away another female, usually her eldest daughter, will take her place.

At Howletts Wild Animal Park we have 2 family groups which closely associate for much of their time, but will also go off and forage in separate paddocks, especially in the mornings. This is similar to “bond groups” in the wild which are usually separate families who are related.

We asked Head Elephant Keeper, Natalie for some tips on how to spot the leading ladies in our two family groups: "Tammi leads her family group of 7, so is considered their matriarch. However, she does seem to rely heavily on her eldest daughter Jara in leading the group.  Tammi has the longest tusks of all the Howletts elephants.  Unlike Coco the bull, her tusks are slender, as is typical of females." 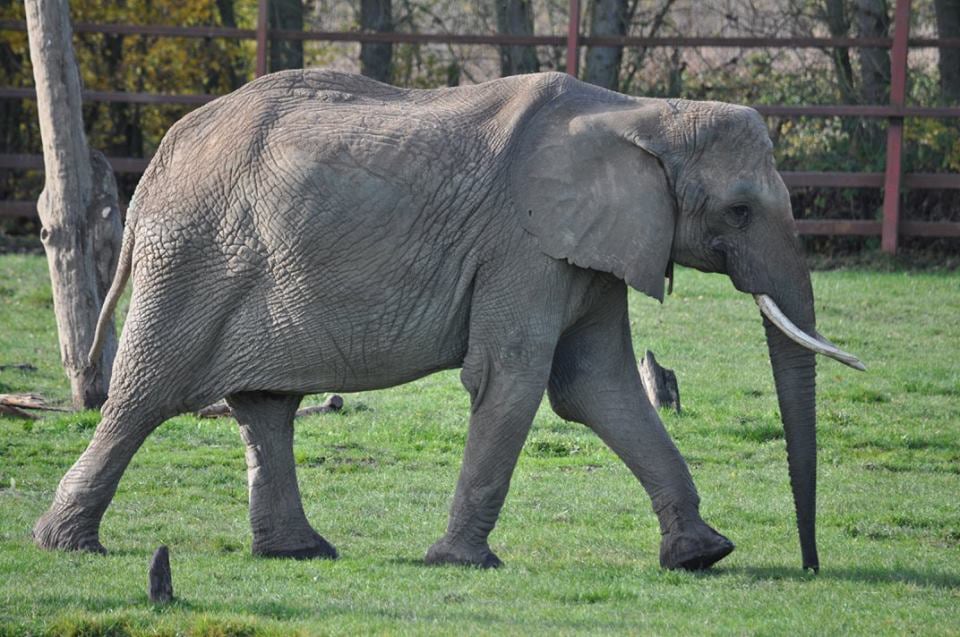 "Jama is still a young female but is Matriarch of her family of 5. Recent studies at Howletts have shown that when Jama calls (a low call known as a “lets go “ rumble), all her family will follow and sometimes youngsters from Tammi’s family will also follow her. Jama is more difficult to recognise than Tammi. She is the 4th tallest after Coco, Tammi and Jara. She has shorter tusks than Jara and is a much stockier, wrinklier elephant." 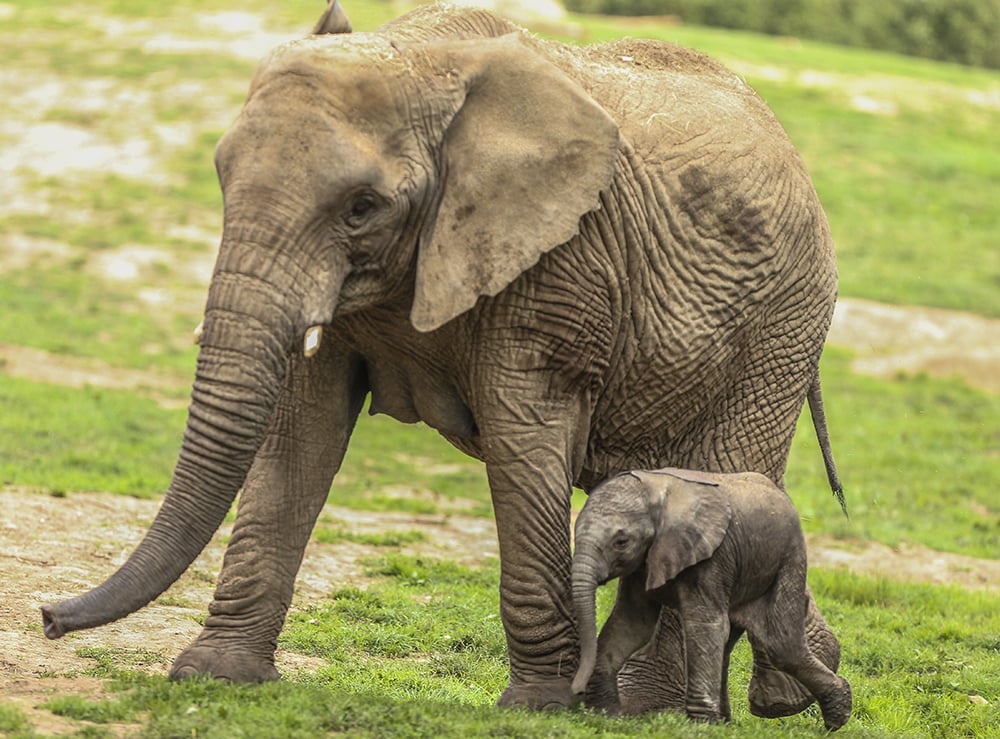 8. Waiting for baby
Not content with just one breaking record, elephants also have the longest pregnancy of any mammal!  After 22 months (we're exhausted just thinking about it!), elephant cows give birth to a whopping 90kg calf! 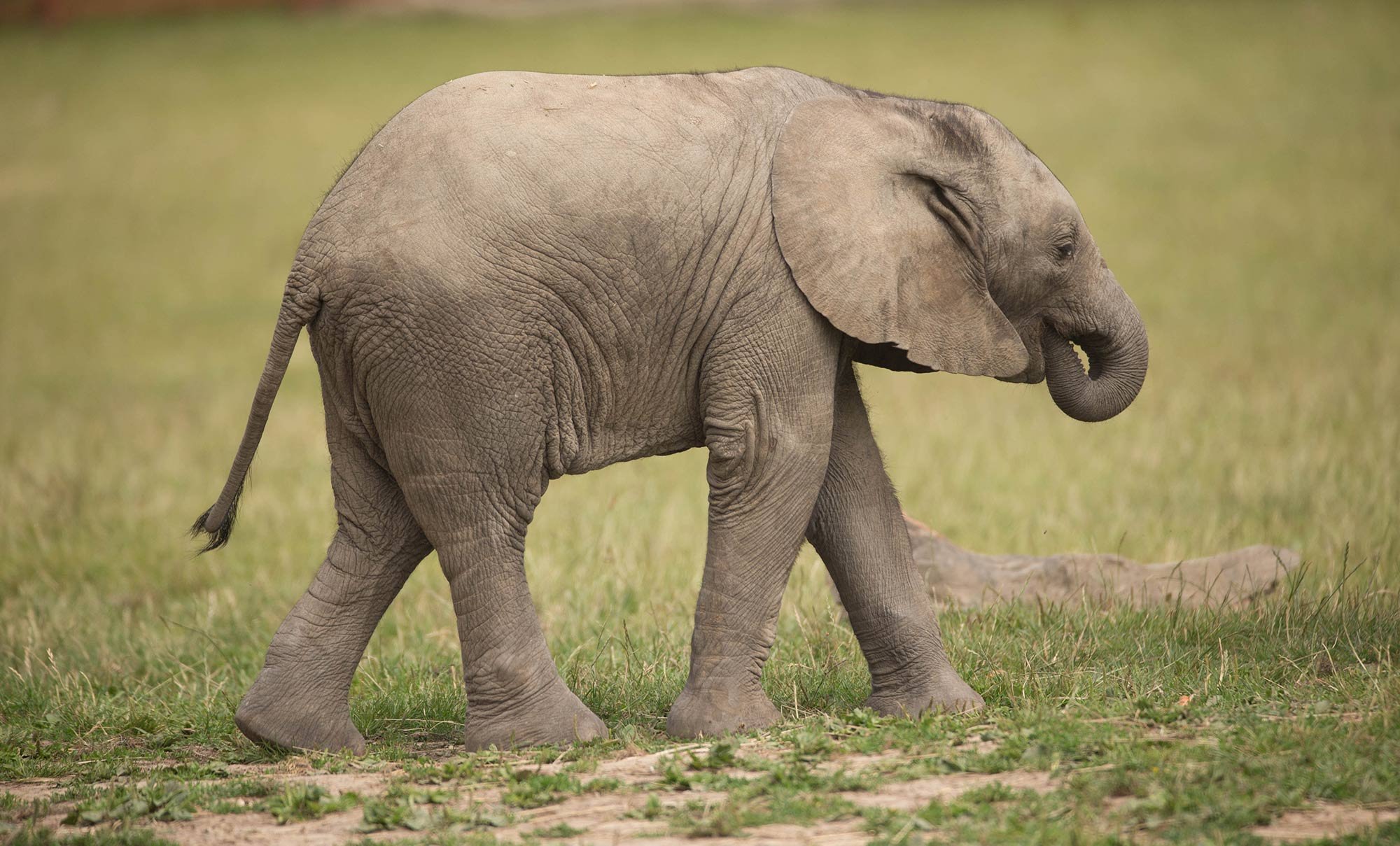 9. Pardon?
When you think of the sound an elephant makes, you probably think of the loud trumpeting call.  However, most of their vocalisations are of such a low frequency that humans can't hear them!  These low rumbling, or infrasonic sounds can travel great distances to warn or reunite with other elephants.

10. Jumbo rescue!
In 2019 The Aspinall Foundation in conjunction with Wild911, an American NGO, stepped in to save 11 elephants and a large number of other animals within a hunting reserve in South Africa from an almost certain death.  The starving, dehydrated animals were darted and transported to nearby Buffalo Kloof, a private game reserve, where they are now thriving under 24hr protection. 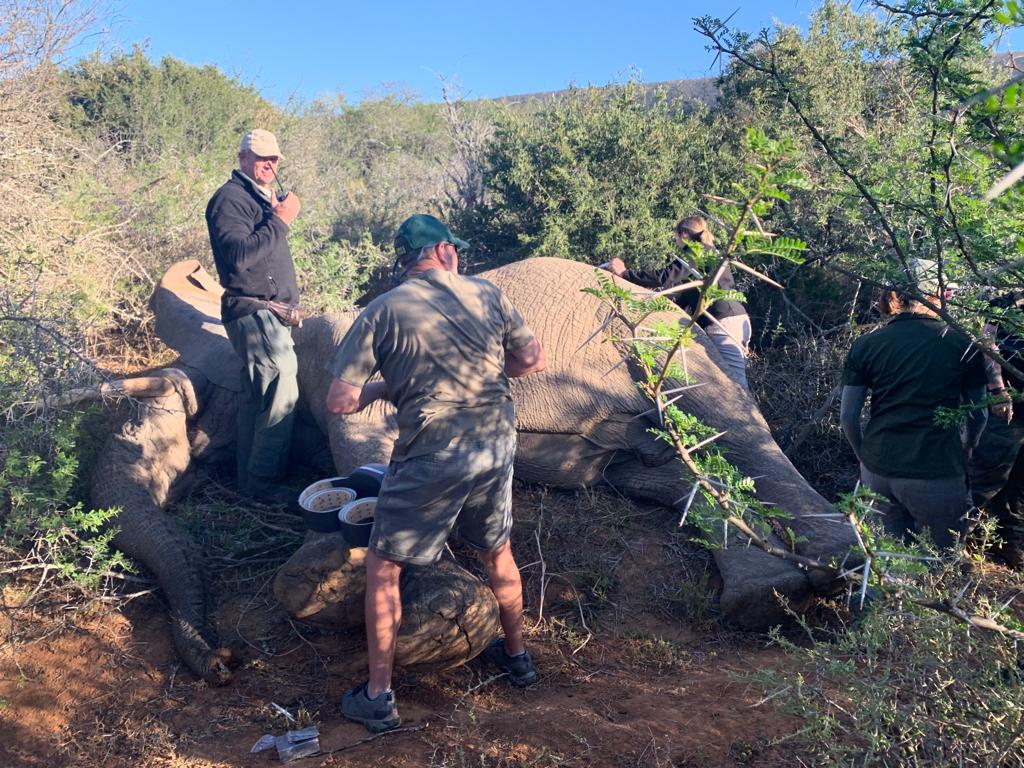 An elephant is sedated and prepared for travel

Find out more about this enormous elephant rescue mission.

Come and visit our herd of gentle giants this summer at Howletts Wild Animal Park, including our 3 adorable calves, Nusu, Oku and Nguvu!