African Painted Dogs are on the brink of extinction in the wild, with estimated numbers as few as 1,500! In a revolutionary progression of our Back to the Wild programme we are about to send a pack of seven African painted dogs bred in the UK at Port Lympne to a protected reserve in Gabon.

The Aspinall Foundation, current studbook holders for the species, was the first to successfully breed a mother-raised litter of pups in the UK back in 1997 when female Masai gave birth to four males and three females. Many more litters have followed over the years, and now our Back to the Wild programme will see a pack of seven repatriated to Gabon. Painted dogs are the only living members of the genus Lycaon and are so genetically divergent from wolves, dogs and other members of the canid family they would not be able to interbreed. Their extinction would meanthe loss of a unique canid lineage several million years old and yet their numbers continue to decline as a result of ongoing habitat fragmentation, conflict with livestock and game farmers, accidental killings by snares set for other animals, road accidents, and infectious disease.

Painted dogs have a reputation of being cruel and blood-thirsty killers, disembowelling their prey and tearing it to pieces. Certainly they have a high kill rate, and by hunting in packs where they work together they can target prey much larger than would be possible if they hunted alone. But they hunt to survive and are often unfairly persecuted, and treated as vermin. Aside from human conflict, habitat loss is a major threat to the survival of the species. Each pack requires a significant range to support them, not least because they coexist with other carnivores such as lions, spotted hyenas, leopards and cheetahs. In fact lions also prey on painted dogs making close proximity with a pride very dangerous to a pack.

Because of their tendency to roam, packs often stray outside the safety of protected areas. On such occasions they are more likely to encounter domestic dogs. This poses further threats as it is believed domestic animals can act as a reservoir host for many canid diseases such as rabies which has been known to wipe out entire packs of painted dogs. Despite the threats they face the species is remarkably resilient, especially when packs are larger. Provided the food source is plentiful painted dogs have large litters, giving them a chance to bounce back from catastrophes, such as disease, which cause temporary declines in population numbers. 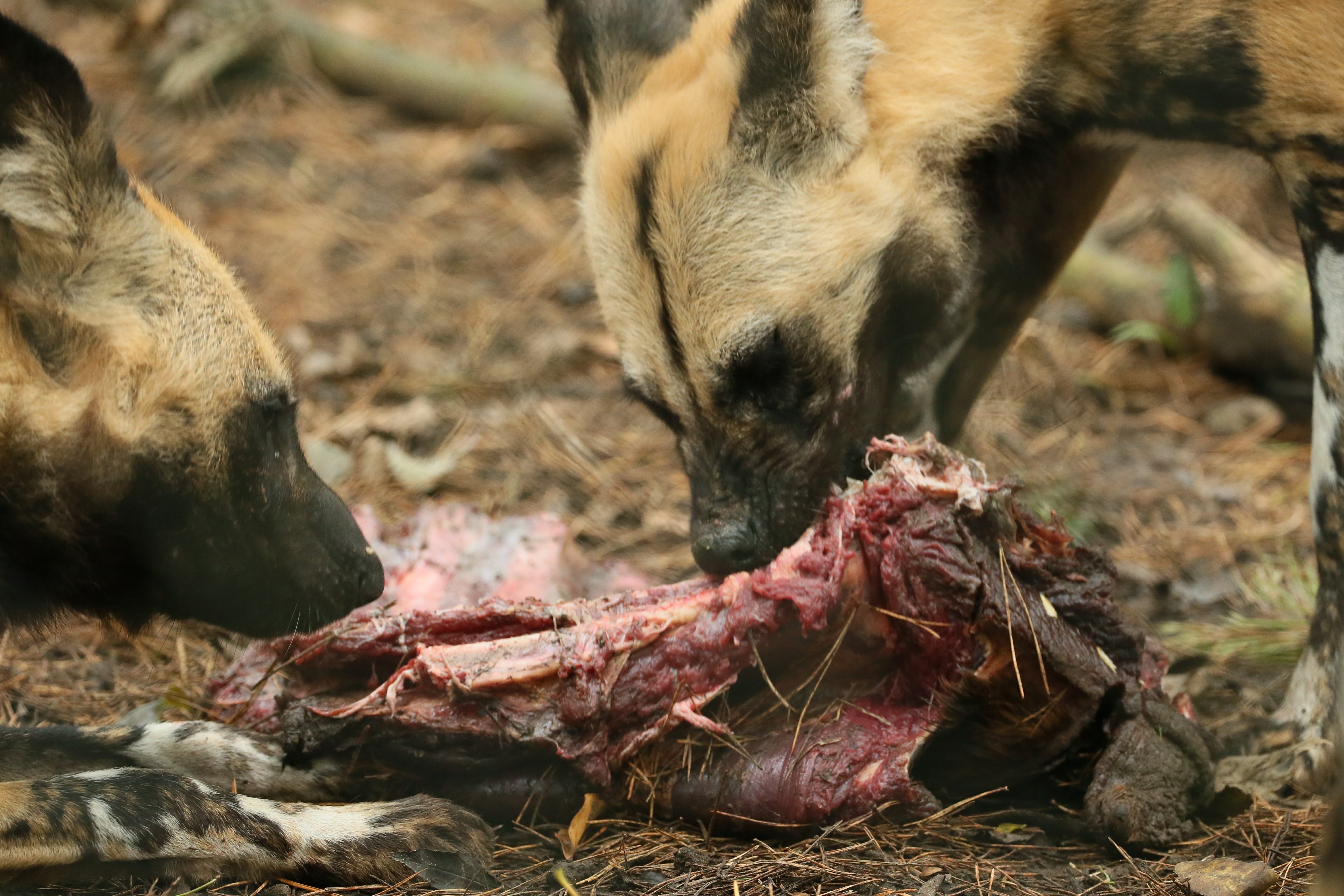 The group we will be repatriating to a protected reserve later this year were all bred at Port Lympne, and share the same parents. Painted dogs are about the same size as a medium to large domestic dog, with slender muscular legs and amazing ears, round like a radar dish that can be turned in all directions to pick up even the most subtle sound. Their shape and size also helps to dispel heat. It is clear to see how they gained their name, with a coat ‘daubed’ with a mixture of black, tan and white. Each dog has a unique pattern, although given both flanks are different it is necessary to know each side of a dog’s pattern for it to be an effective aid to identifying them. Our group of seven will be the first to make the journey from Kent to Africa, but hopefully more will follow and they will experience the life they deserve, living in freedom in the country of their ancestors.

Topics: Conservation, Gabon, back to the wild, painted dog