An Amazing Sighting in Congo

Lengui survived exposure to the bush-meat trade on two separate occasions and went on to thrive in the wild. Then, after more than a decade in the Lefini Reserve, we lost sight of her. Sometimes it isn’t possible to observe a particular gorilla when monitoring groups living wild, but Lengui disappeared for four years, far longer than would normally be expected. Hopes had faded of seeing her again, until this year when we received some wonderful news.  This is her incredible story…so far.

Before she was even two years old Lengui had lost her entire family. We will never know the full extent of the horrors she witnessed but, according to the villagers who took her, she was found in one of their fields planted with maize. The field was not only used to grow crops, it was also set with snares. None of the traumatised youngster’s family were with her, all that was left was the severed hand of her mother, still caught in the trap that had been laid in the hope of catching smaller prey, and Lengui, distressed and confused, seemingly unwilling to leave the remains. Although too small to eat, or sell on as bush-meat, the villagers had tied her to a stake in the middle of the field and were feeding her fruit to keep her alive. The year was 1994 and young Lengui, estimated to be no more than 18 months old and less than half her recommended body weight, was confiscated and taken to our Gorilla Orphanage in Brazzaville, Republic of Congo. 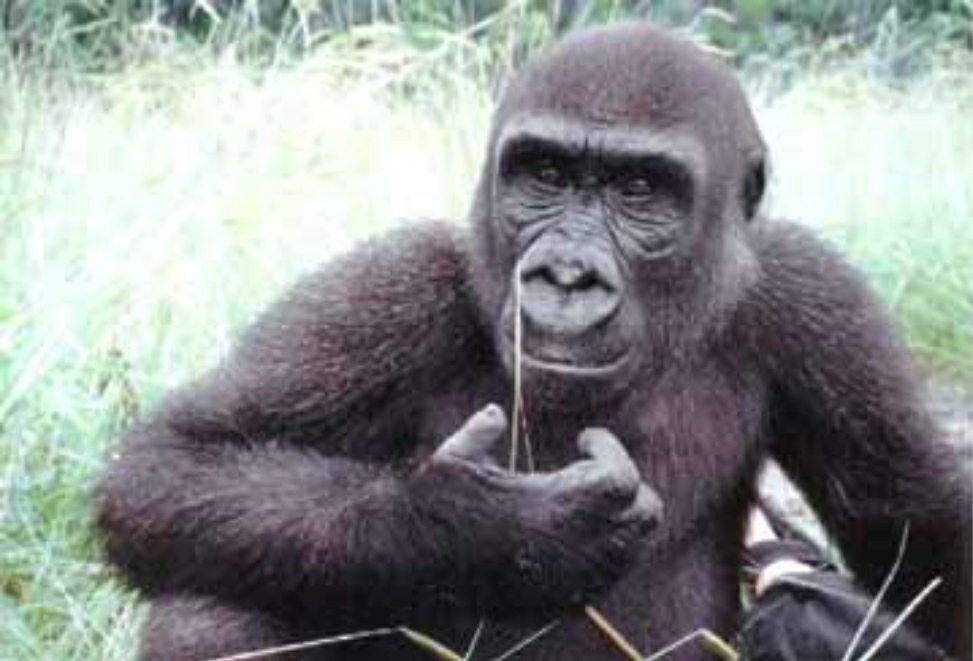 Our staff immediately gave her what she was missing most, the physical contact and affection essential to young gorillas. They also treated her for intestinal worms, and the infected sores from the rope that had been tied around her waist. They fed and watered her, slowly at first, gradually increasing to a nutritious diet. Unlike many orphan gorillas, she survived the first few weeks, regained her health, and soon joined a group of other orphans rehabilitating in a small forest in Brazzaville. In June 1997 civil war erupted. Lengui and the rest of her group were evacuated under fire to the coastal city of Pointe Noire, where she remained almost a year and a half until calm had returned to the area.

By then it was November 1998, and she was already six years old, so rather than returning to the abandoned orphanage in Brazzaville, she and her group were transported to a protected area 130 km north of Brazzaville, the Lesio-Louna Gorilla Reserve. This is an area of savannah hills with gallery forests along the numerous rivers feeding the Lefini and eventually the Congo rivers. The site was selected to give the orphan gorillas a chance to learn the skills necessary to survive in the wild. In December 1998 she was fully released into the Lesio-Louna, along with the rest of her group, three males and three other females. Lengui thrived in her new surroundings, so much so that in January 2001 she left the group with whom she had been released and joined the dominant group in the reserve, the first true case of female transfer between groups ever observed in released orphan gorillas.

While the core area of the Lesio-Louna Reserve was well patrolled by project staff, Lengui and her group were ranging further and further afield, into areas where hunters were able to avoid the park guards and lay snares. On the 26 April 2002, project staff located Lengui’s group in the south of the reserve, and noticed she had an injured hand. It was apparent that, just like her mother eight years earlier, she had caught her hand in a snare. Unlike her mother though, by her sheer strength, she had been able to rip the snare from the ground. Unfortunately her efforts to remove it from her hand caused the wire to tighten, cutting through her flesh and leaving her fingers dead and an infection rising through her arm. To save her life the project team had to amputate her arm just below the elbow. An antibiotic treatment followed, after which she was returned to her release group and despite her handicap, and an increased wariness of humans, she continued to thrive. On 18 January 2003, Lengui was one of a group of five gorillas released to the more isolated Lefini Reserve where we have continued to monitor her. Not only has she managed admirably well since then, she has even successfully raised at least one infant.

At least until 2014, the last recorded observation of Lengui was on the 25 April that year, when she and her daughter, who would have been a little under 4 years old at the time, were seen with the adult male Kelle. Two weeks later, on the 7 May 2014, Lengui's daughter was seen with another male Djéké, but Lengui was not seen and Kelle was subsequently found solitary.

Lengui's whereabouts have therefore been a mystery since April 2014, and although we have always hoped she might be hiding out quietly in a remote forest in the far south of the reserve, after a couple of years she was assumed to have died.

So it came as a huge shock when we received a WhatsApp message from the Congo team on the 25 June this year saying that Lengui had been spotted with Kelle - no other details, just a snippet of information to add to the usual daily updates about Kangu's group. Barely believable, could it have been a miscommunication and that they had meant to say "la petite de Lengui", as the team refer to Lengui's daughter? However the team reiterated that it was indeed Lengui, but that no photos were taken. 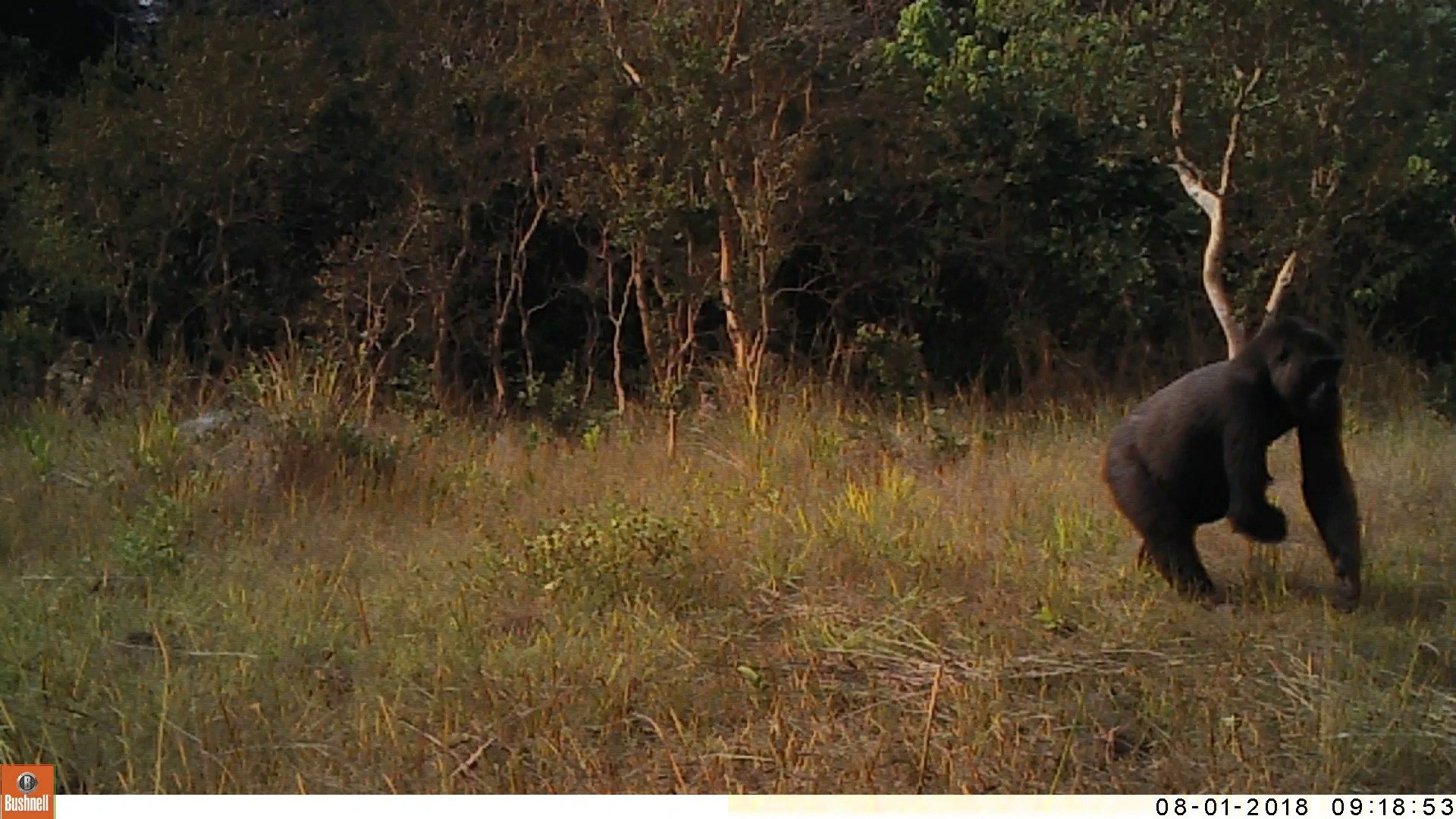 It wasn't until the 1st August that Lengui was caught on a camera-trap, and we finally had proof of this amazing moment in her remarkable life.

Lengui really is one of the main characters within the history of our gorilla programme, and it is great to have her back.