Djéké - From Orphan to Silverback

April 1996 - Djéké joined our specially built gorilla orphanage in Brazzaville, Congo as an orphan, approximately one year old.
June 1997 - civil unrest led to an emergency evacuation and temporary rehousing at Tchipounga Reserve just north of Pointe Noire.
It seemed ten years of work in Congo had been destroyed. The search for a new site led to the establishment of our project in Batéké National Park, Gabon.
January 1998 - the complexity of negotiations in war torn countries such as Congo are immense and it became clear the newly appointed Minister of Water & Forests would not allow the gorillas to be moved out of the country. They would have to be returned to the LesioLouna sanctuary at Lefini. Males Djéké, and Kelle and female Koto were joined by female babies, Mpoumbou and Massabi. A high level of disruption and danger existed for our team and the gorillas throughout the whole of 1998, the possibility of emergency evacuation never far away. Djéké’s group meanwhile quickly settled in their new dormitory, and over the next two years continued to do well under his leadership despite a few skirmishes with one of the older gorilla groups headed by male gorilla, Kola. By 2000 it was decided to seek a new area for Djéké’s group.

2001 - Djéké’s group (now ten juvenile orphans, 4 males & 6 females) are moved to a new site where they settle well . The group are now free 24 hours a day, having previously been housed in a dormitory overnight.
2002 - the group are becoming more independent and expanding their territory. Djéké (only a young blackback) is proving himself to be a good leader and the group remains cohesive.
2004 - Djéké’s group were moved to the Lefini reserve. They settled well and with 10 km of forest were not expected to interact with other gorillas. Then in December solitary male, Bangha, came across them, causing the group to split into two.
2006 - two females in Djéké’s group have babies – Massabi and Koto. As the dominant male Djéké is likely to have fathered both infants. They are the 2nd & 3rd births to reintroduced gorillas.
2007 - two more babies seen. Sadly one disappeared a few weeks later. With infant mortality estimated at 40% in the wild, this is not atypical. Again Djéké, as dominant male, is considered likely to be the father. Absolute proof would require genetic tests, particularly as Bangha had been close by.
2010 - whilst still an impressive silverback, Djéké has left his group and is travelling around the fringes of the reserve. A smaller male, Karma, has taken over the role of leader, although he is dominated by assertive female, Koto.
2011 - at least one new baby in Djéké’s group, an infant born to Helene.
2015 - Djéké is with females Lokolo and perhaps Lengui. He has been in a few fights as he has a number of scars on his head but looks very healthy otherwise.
2016 - the team observed Djéké, now 21, accompanied by 9 yr old orphan male Loketo, and occasionally also the 6 yr old offspring of Lengui, one of the females Djéké won over for a time in late 2009; he might be the father.  Tracks have also been found to suggest as many as five - maybe Djéké has assembled a small group of youngsters that can mature under his leadership.
2017 - in January Djéké has again been observed with a group of subadults. Saved from almost certain death as an orphan.                                              2019 - Djéké and his group are seen for the first time in just over a year! 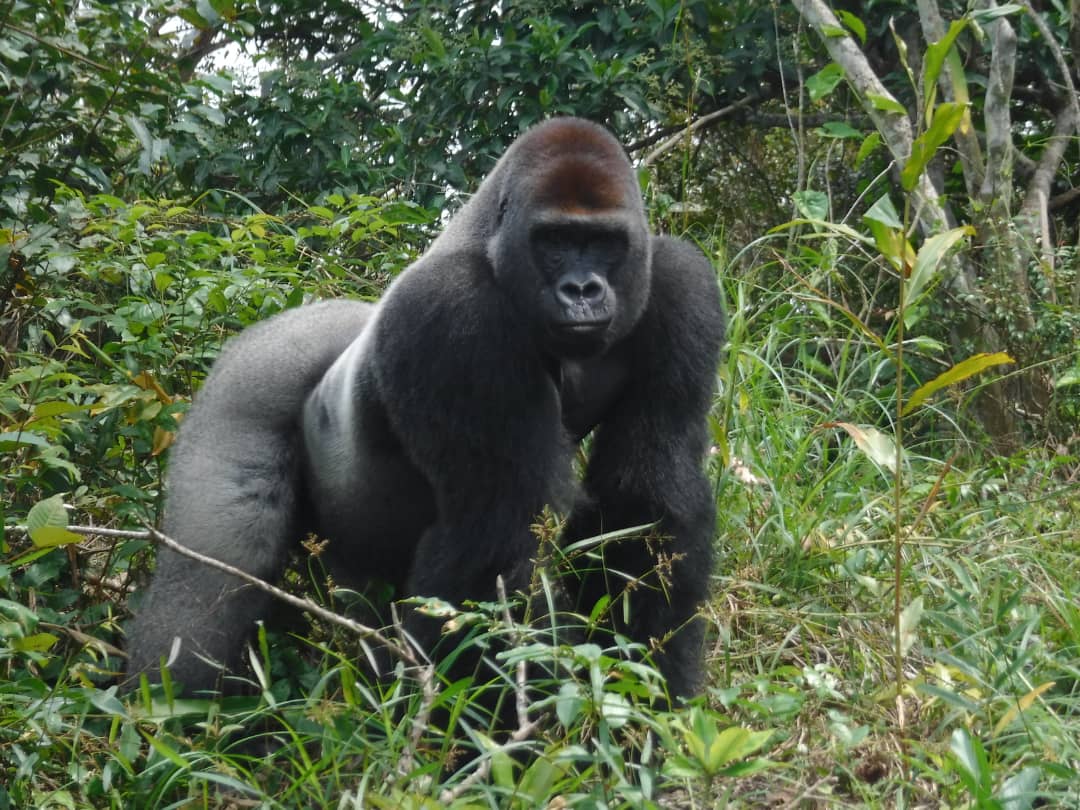 Djéké is now in his prime, and we should be able to share more of his story with you in the years to come. His story is inspiring but we need your help to continue our vital conservation work.