Gorilla Populations Are Improving, But They’re Still in Dire Need of Support

A landmark decade-long study has recently been published in Science Advances, bringing with it the uplifting news that there are around a third more gorillas in the wild than previously thought, with numbers now thought to be over 360,000 in the wild.

An expert team of scientists and researchers walked more than 5,400 miles – that’s as far as London to New York – to carry out extensive foot surveys across Africa, covering previously unobserved ground within some of the most remote forests, using special new survey methodology to produce these latest figures.

But, unfortunately, it’s not all good news. The survey also found that 80% of gorillas live outside of protected areas and that the population is in decline by just under 3% every year, supporting their continued status as critically endangered on the IUCN Red List. Though the future is brighter, there’s still much work to be done – and here at The Aspinall Foundation, we’re pushing forward with our dedicated gorilla protection projects. 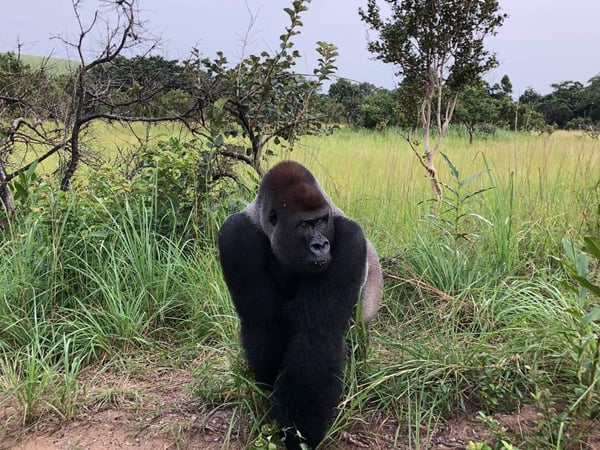 Why are gorillas critically endangered?

The main threats to gorillas include poaching, disease and habitat loss. The illegal trade of bushmeat is still rife throughout Africa, too, with a lack of legal backing to deter hunters. To help tackle the problem, in 2008 we helped to fund a wildlife law enforcement organisation named PALF (Projet d'Appui á l'Application de la Loi sur la Faune Sauvage), which actively enforces wildlife laws and monitors illegal trade. And in 2014, £20,000 of your donations helped to launch a sniffer dog programme to reduce the level of illegal hunting.

One of the most significant takeouts from the recent survey is that it shows gorillas are able to thrive under the protection of wildlife rangers and guards. By working with local partners and governments, The Aspinall Foundation is part of a major ‘Gorilla Protection Project’ across Gabon and Congo to safeguard around one million acres within the ecosystem of the Batéké Plateau National Park.

Here, gorillas and a variety of other wildlife can live and breed in a safe environment – in 2016, we saw more than 30 baby gorillas born in the wild, and we’ve helped reintroduce over 60 gorillas back into this environment. But all of this is only possible with your help – in 2015 alone, we spent over £427,000 on biologists, behavioural experts, monitoring costs and patrols.

How can you help save the Gorillas?

Our work is only possible with public donations and we deeply value your contributions. Without your support, we would not be able to continue our dedicated conservation efforts.

For a sneak peek into some of our biggest projects, download our Back to the Wild eBook below!

You’ll see how we used our supporters’ funding to release four Western Lowland gorilla brothers back into their natural habitat, and you’ll get an insight into some of our other fascinating projects around the world, too.