Did you know that Howletts Wild Animal Park is home to the largest African elephant herd in the UK?  21 year old bull, Coco, lives with his 13-strong herd in a spacious 8 acre enclosure including paddocks, shelters, wallows and sand yards.

Each member of the herd, including the 3 young calves, has a distinct personality. 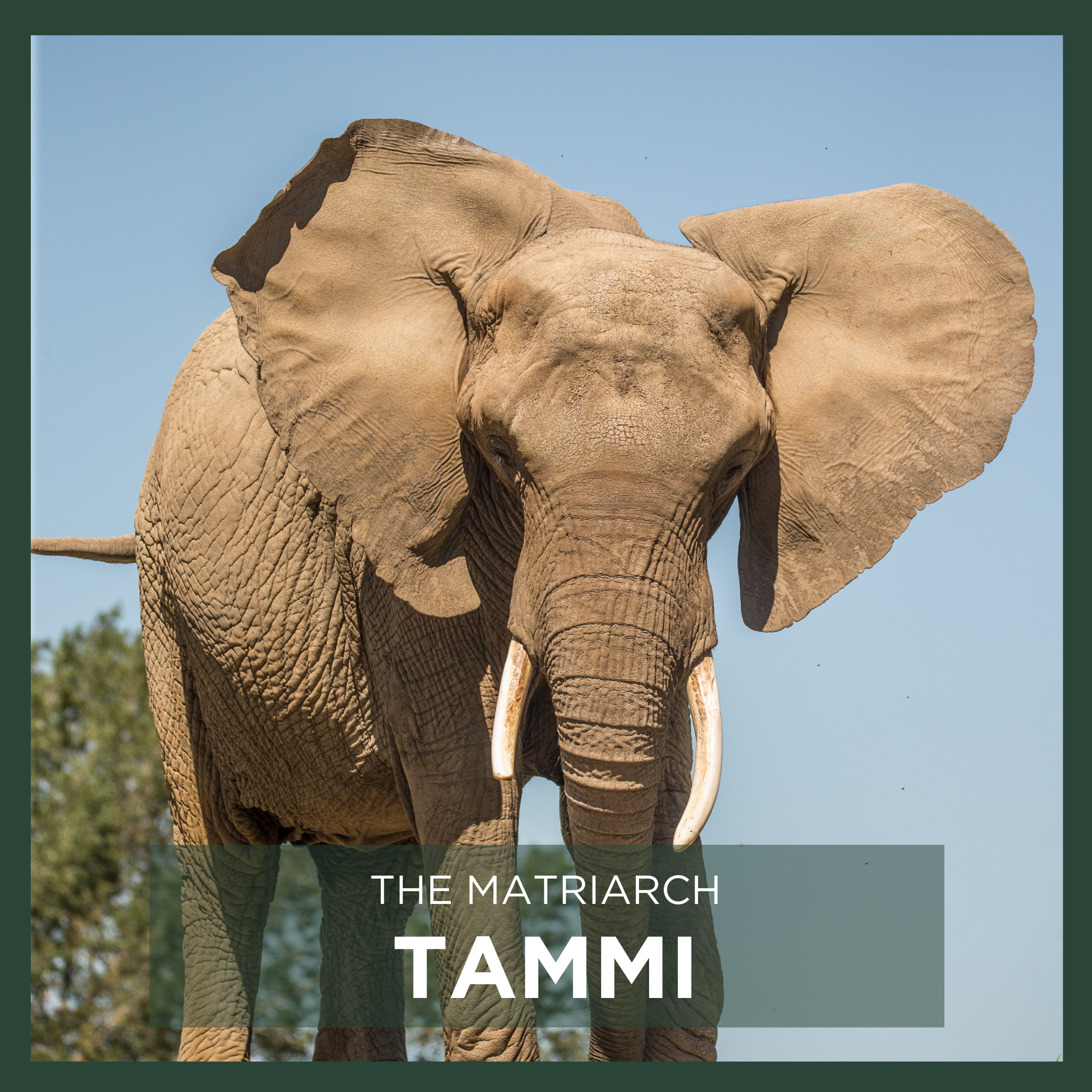 At the grand age of 34 Tammi is our oldest elephant, and the well
respected matriarch of the herd. A calm natured character, she generally
appreciates time on her own, preferring to socialise with the rest of the
herd on her own terms. Recognisable for her height, slim physique and long legs, Tammi likes to watch her weight, so generally can’t be won over by food.  Unusually for an elephant, she can be a little bit clumsy, often forgetting how big her tusks are and catching them on things

Tammi has three female calves Jara, Uzuri and Mirembe She is very
protective of them all, but is extremely close to the eldest, Jara, and the
two are practically inseparable It can even be a challenge to split them up
for a few seconds for weighing.

She uses her seniority to keep the boisterous young bull, Impi, in check. 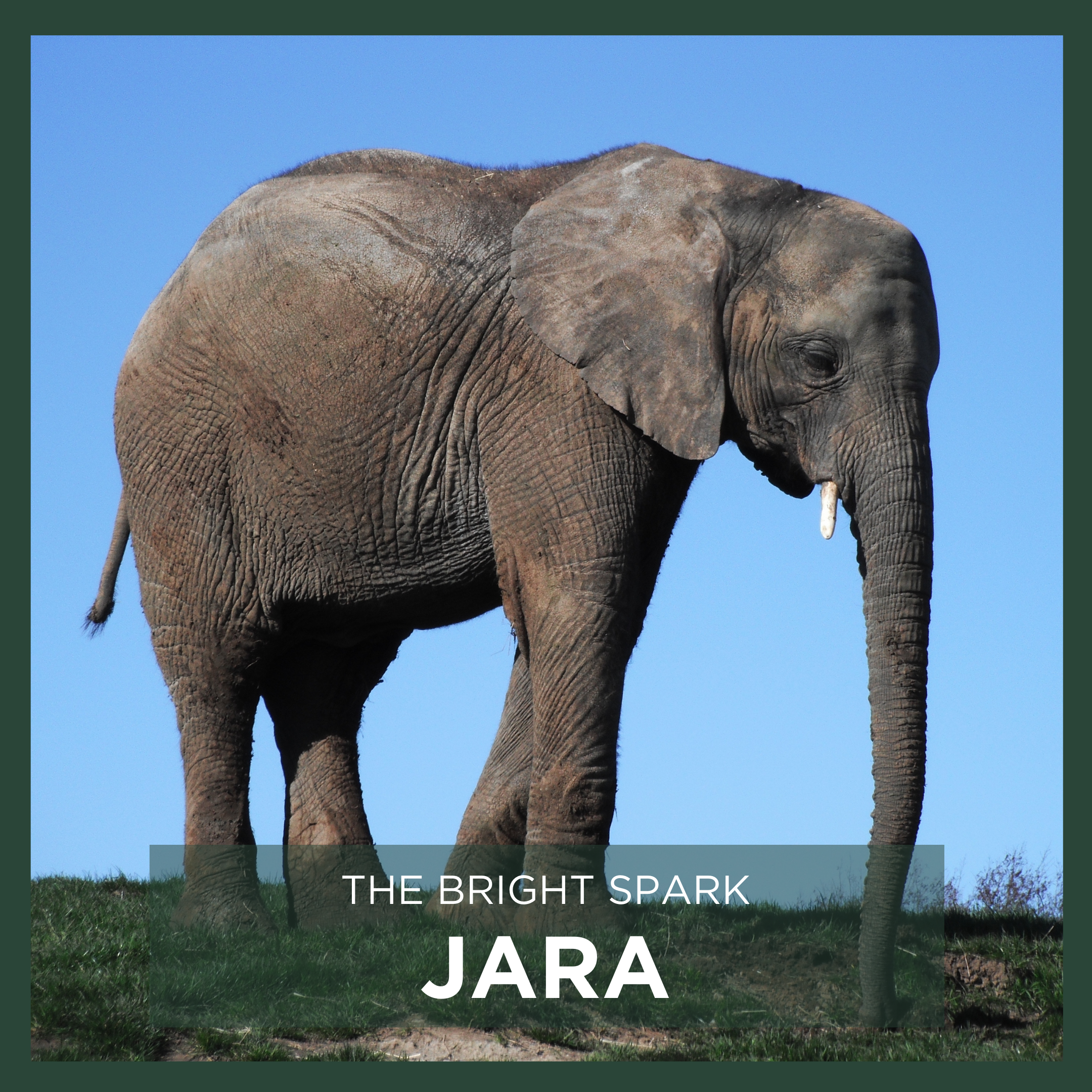 Teenager Jara is the bright spark of the herd Sharp and inquisitive, she responds well to enrichment and will often be the first one to spot novel new items and find hidden food!

She is incredibly close to her mum, Tammi, and they often have greeting ceremonies after being separated for only a few minutes.

She has always been very maternal, having adopted Manzi at aged 6 and been very involved in the rearing of her sister, Mirembe.

For an elephant, Jara has very smooth skin thanks to all the time she spends in her favourite places the pool and mud wallows. 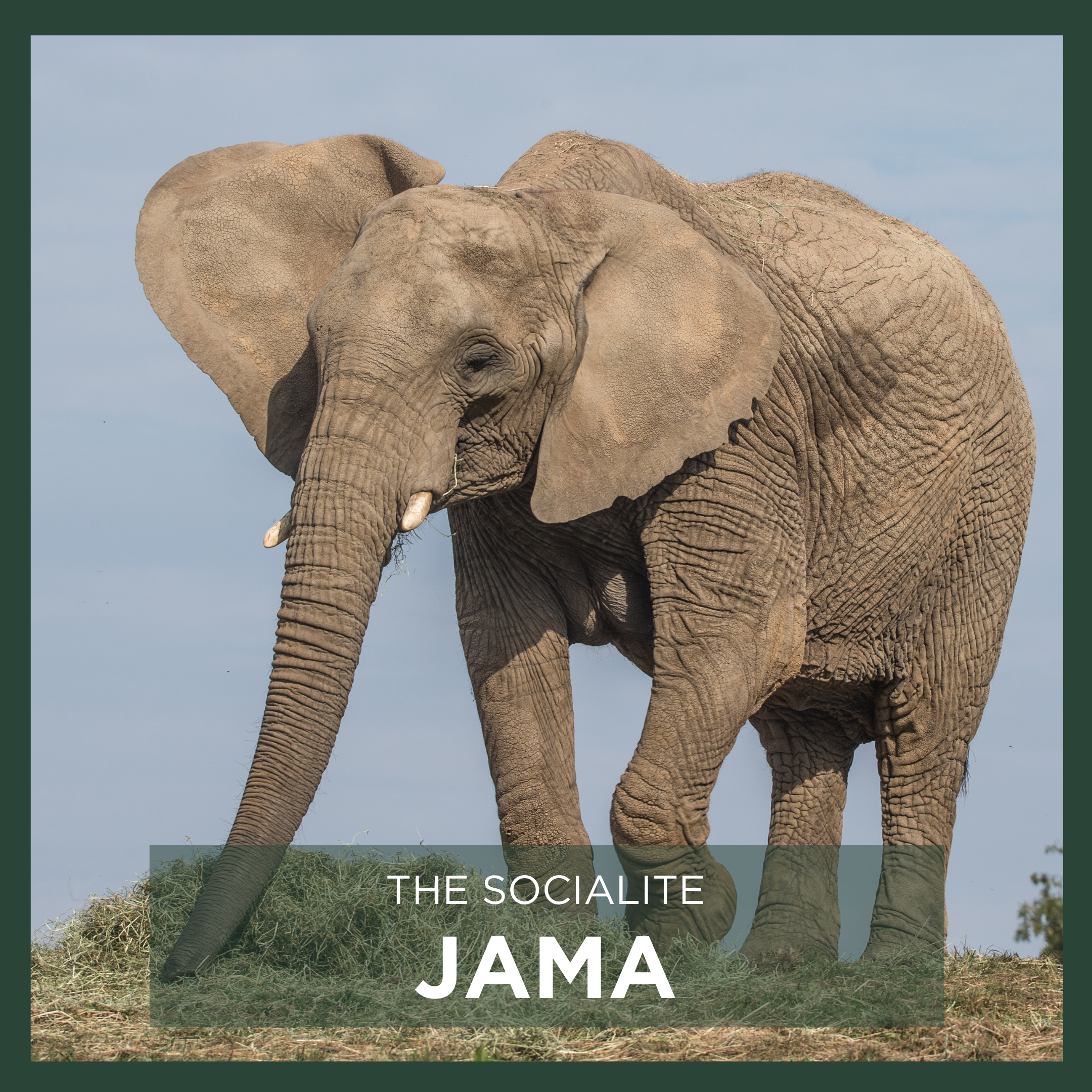 15 year old Jama is the confident socialite of the group and a natural leader She is calm, relaxed and good natured, enjoying attention from our keepers and interacting well with the other elephants.

She is very much a family girl, taking a leading role within her group and being an excellent first time mother to little Nusu.

She is easily recognisable for her slight chubbiness and short symmetrical tusks. 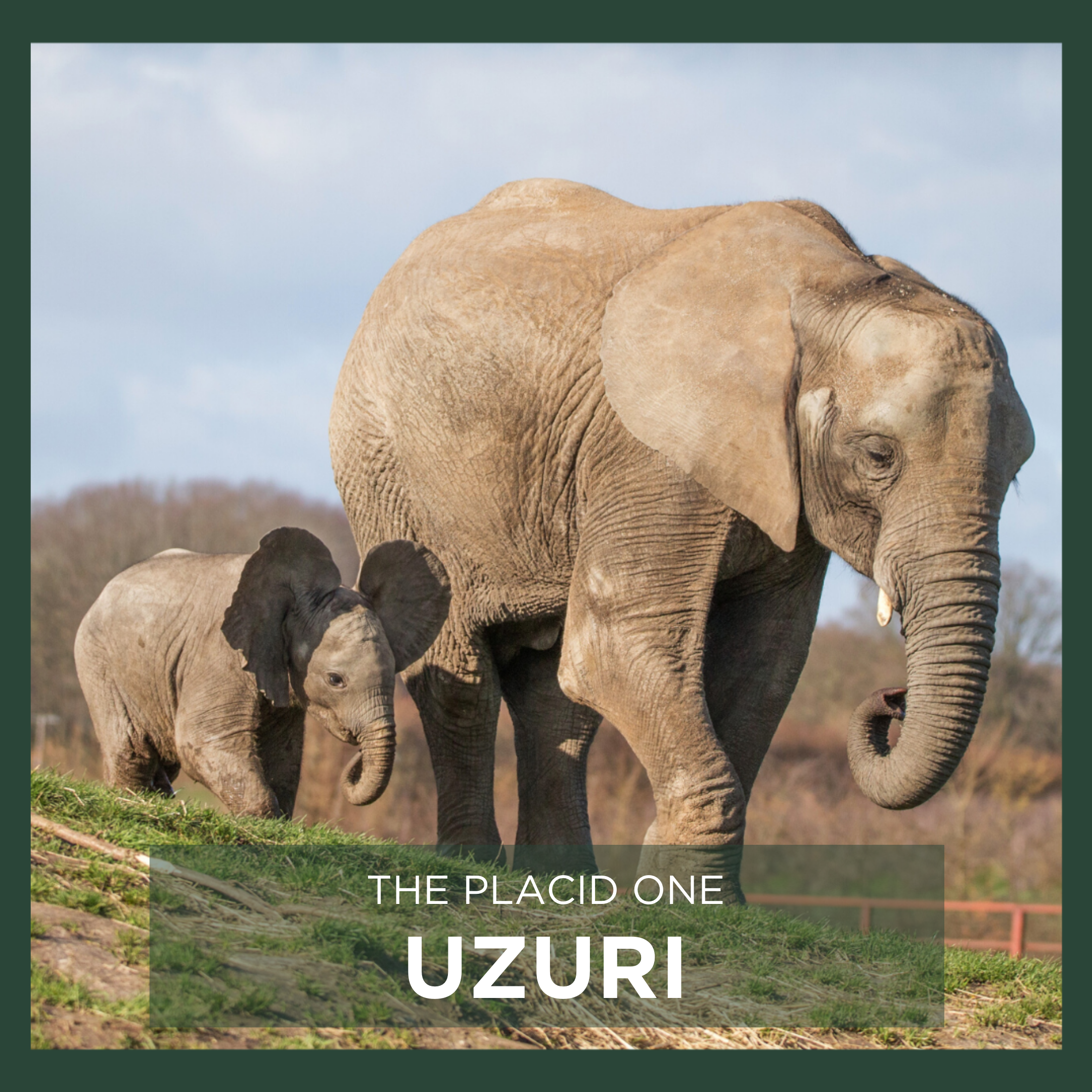 Uzuri is the placid one of the group, a well connected elephant within the herd, who leads a little subgroup of Manzi, Juluka and Oku.

She is very maternal, affectionate with our keepers and is a lot more laid back than her sister, Jara! 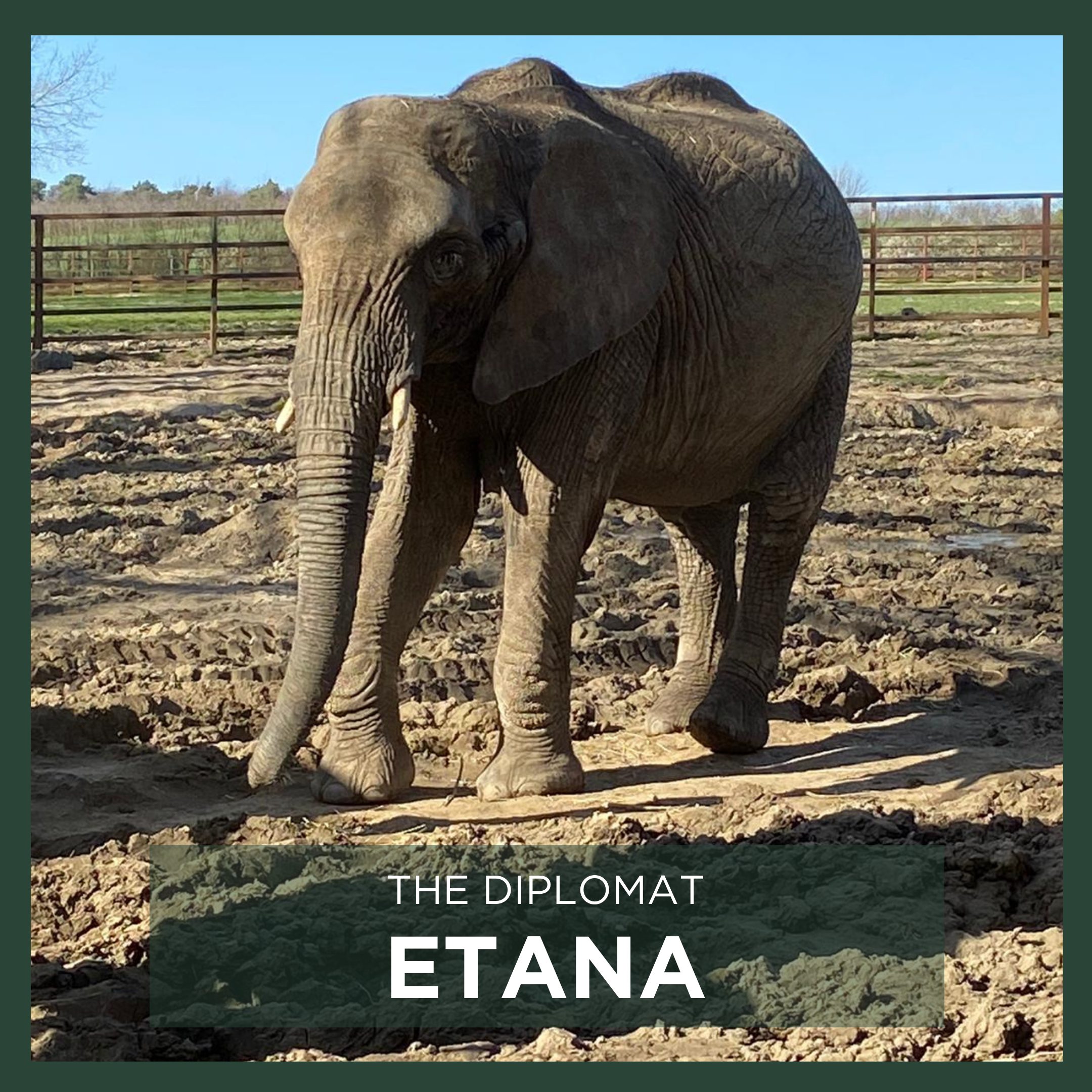 The diplomat of the herd, Etana gets on well with everybody.  She
can be recognised by her distinctive slightly pointy forehead and very short tusks.

She occasionally has to gently reprimand Mchumba, who can get on her nerves!

She always sleeps lying down in close contact with others. 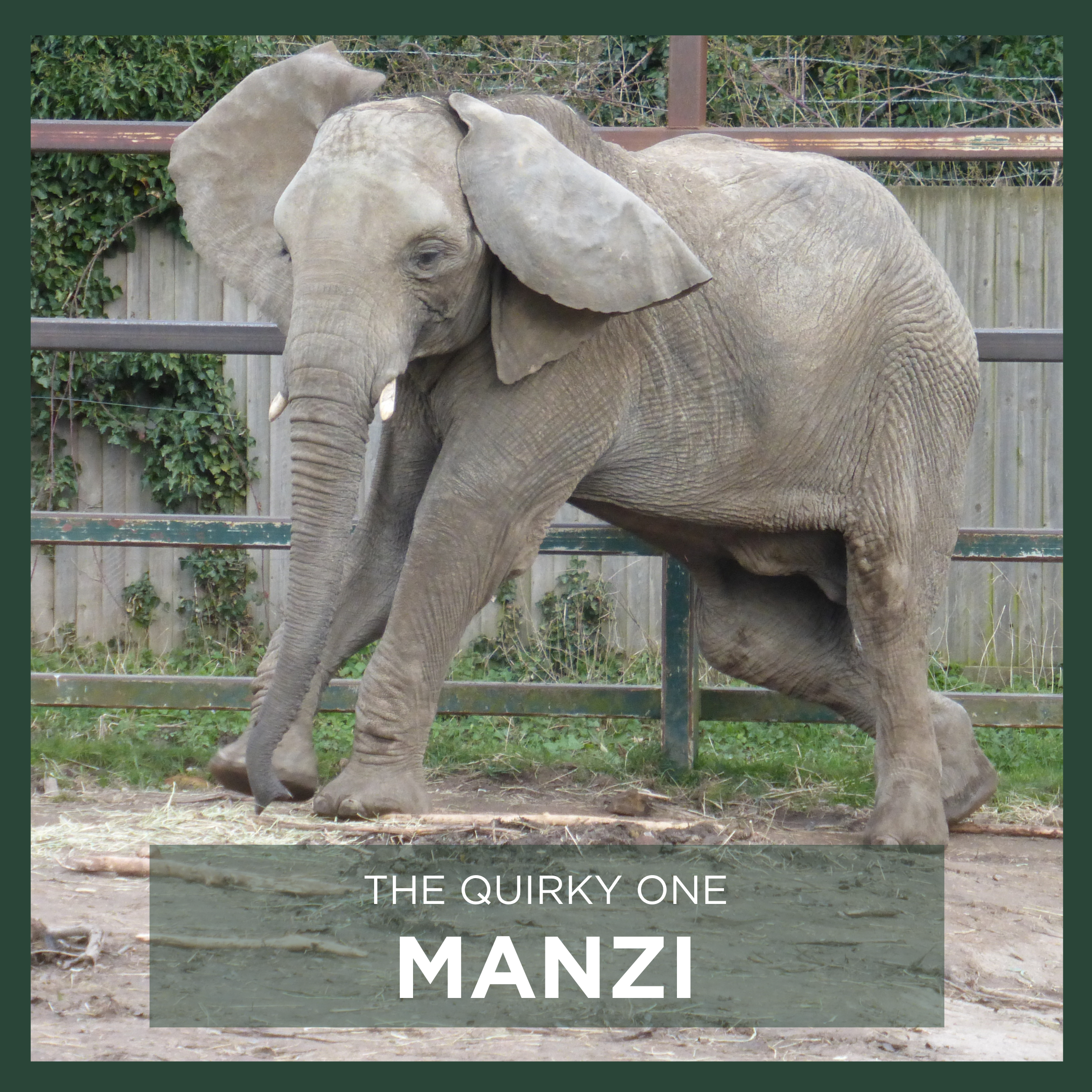 11 year old Manzi is the quirkiest elephant in the herd, with some unusual habits She is a very noisy eater, making a clicking gurgling sound when eating and drinking to show her contentment.

She also likes a snooze during the day, resting her trunk on a piece of old browse which she wedges between her front legs Our keepers refer to this
as her ‘sleeping stick’!

She can be a little bit timid when faced with new situations and changes in routine, but is a very playful elephant, especially with the youngsters from Jama’s family, Mchumba and Nusu in particular. 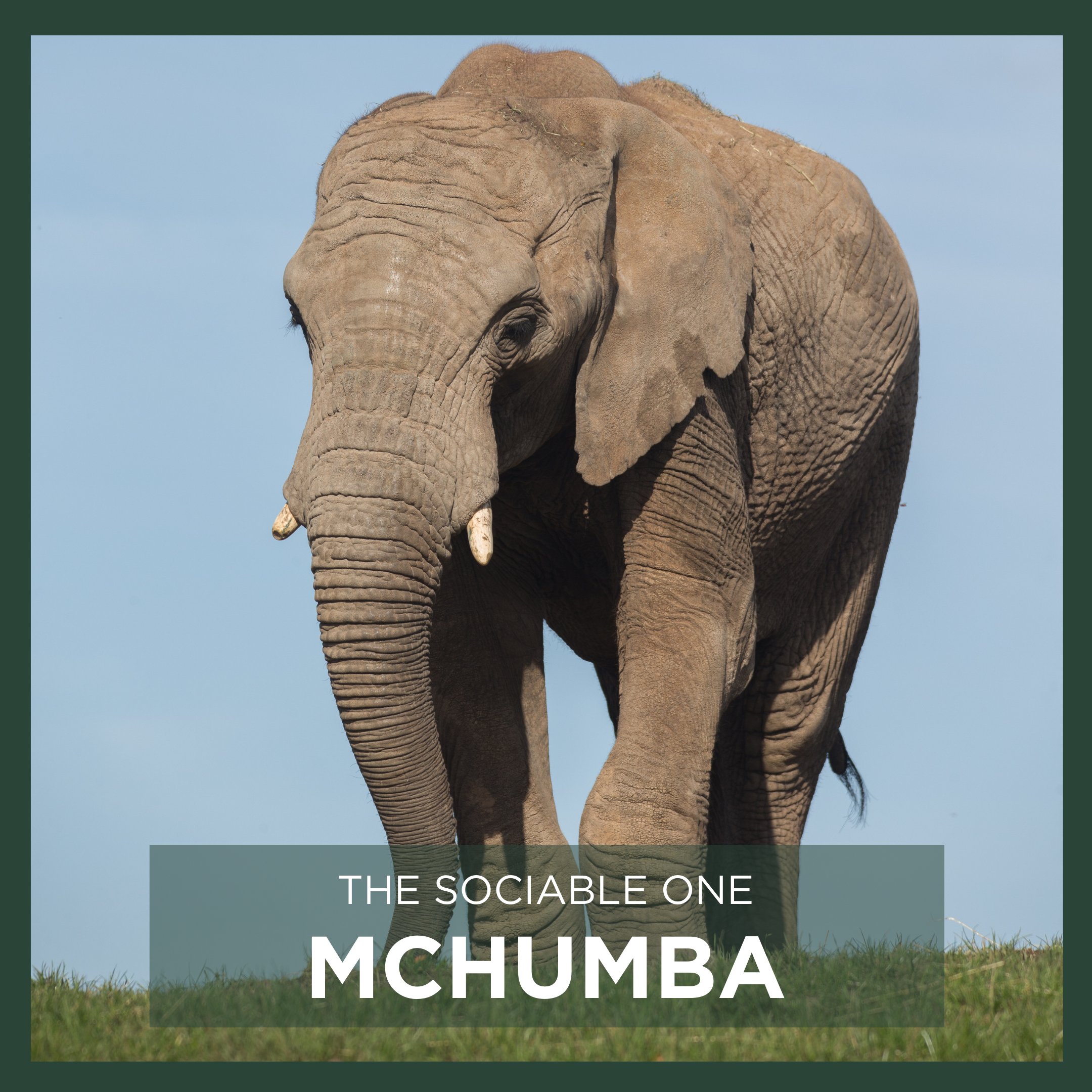 11 year old Mchumba is a sociable elephant who very much loves his food.

Friendly and cooperative with the keepers, he loves to play fight but can be a little accident prone, having broken his right tusk twice in as many years! 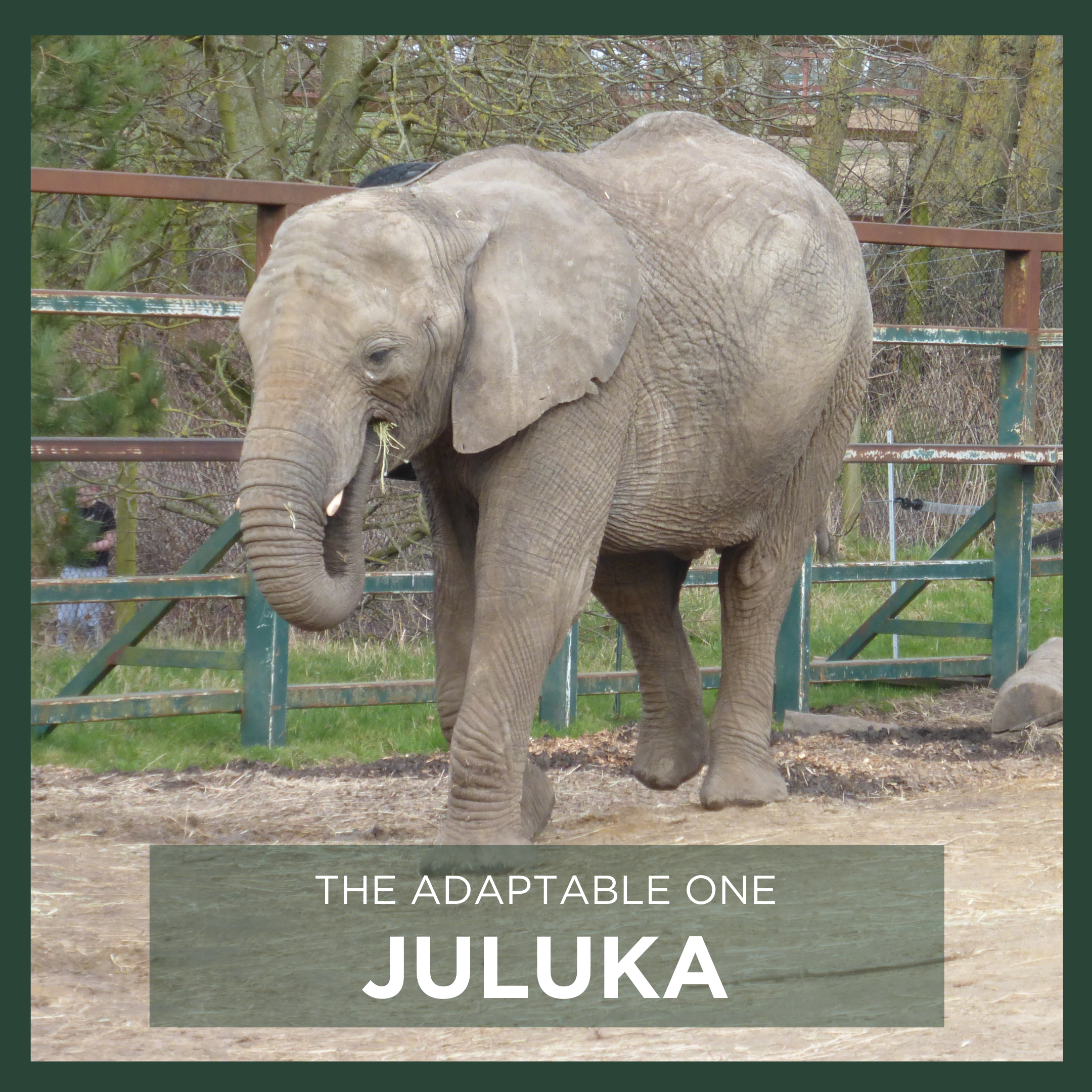 Young Juluka is the adaptable one of the group, always dealing well with new situations.

She is an affectionate, friendly and sociable young female who enjoys the
company of the other elephants and keepers.

Easily spotted within the herd for her small and round ears, she is excellent with the calves. 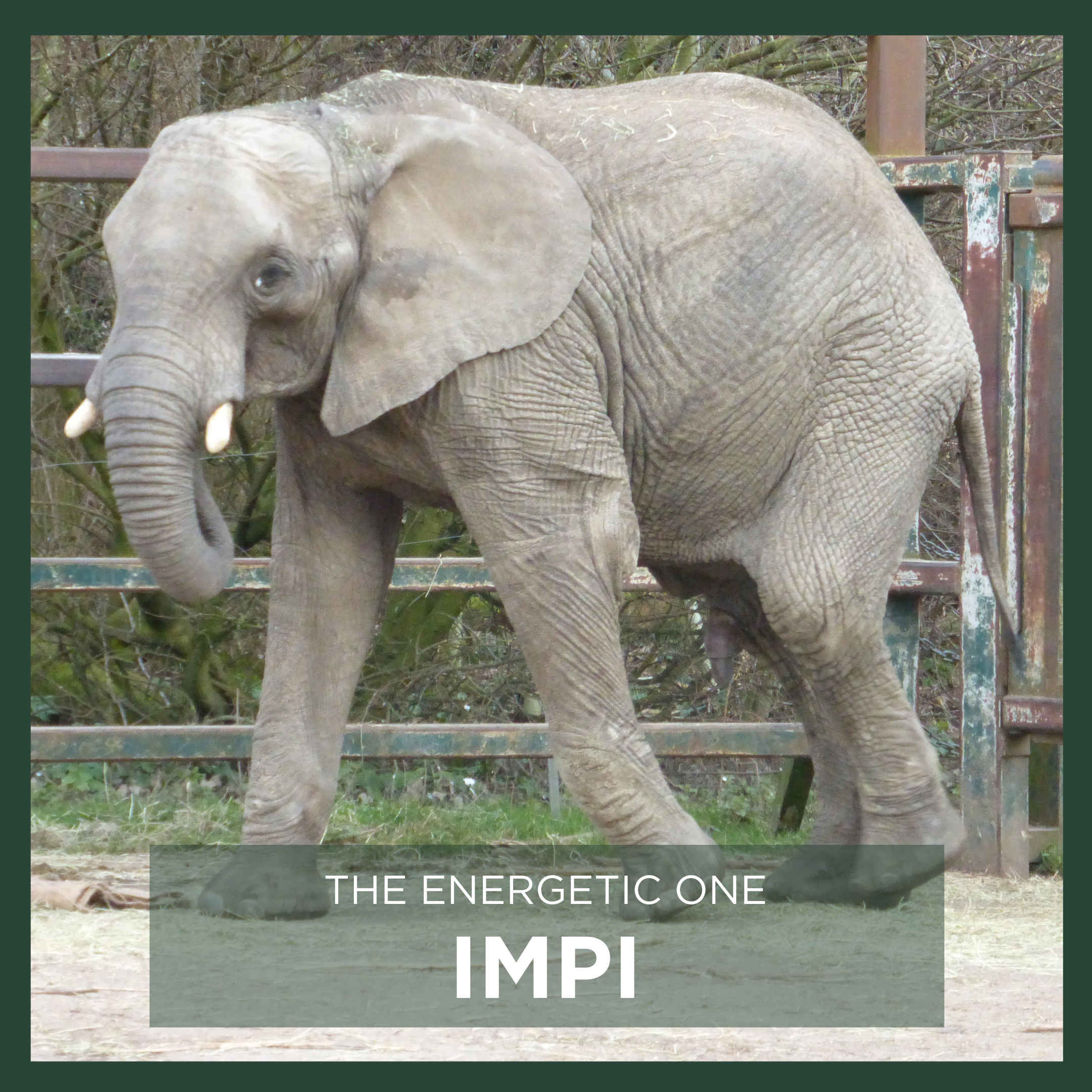 10 year old Impi is the live wire of the group and the most energetic of the younger elephants.

He can often be seen playfighting with Mchumba.  Although boisterous and a little bit on the stubborn side, Impi is very gentle and trustworthy around the young calves. 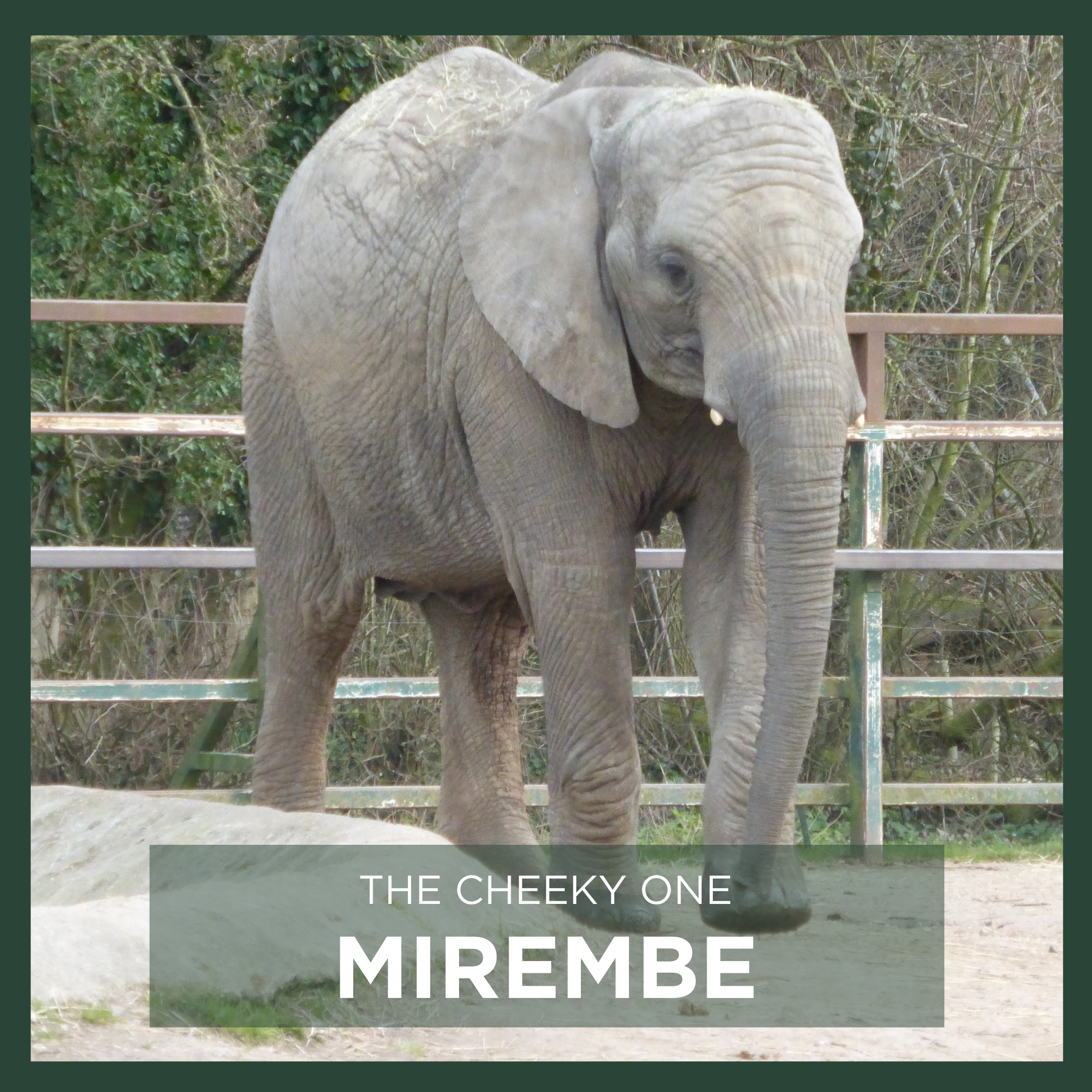 Mirembe is one of the most active members of the group and quite a cheeky character.

She loves exploring the paddocks, forages well and is inquisitive and playful with novel enrichment items.

She has the smallest tusks and long tail hair, so is easily recognisable.

A popular elephant with an abundance of playmates, she enjoys a strong position in the herd as a daughter of the dominant female, Tammi. 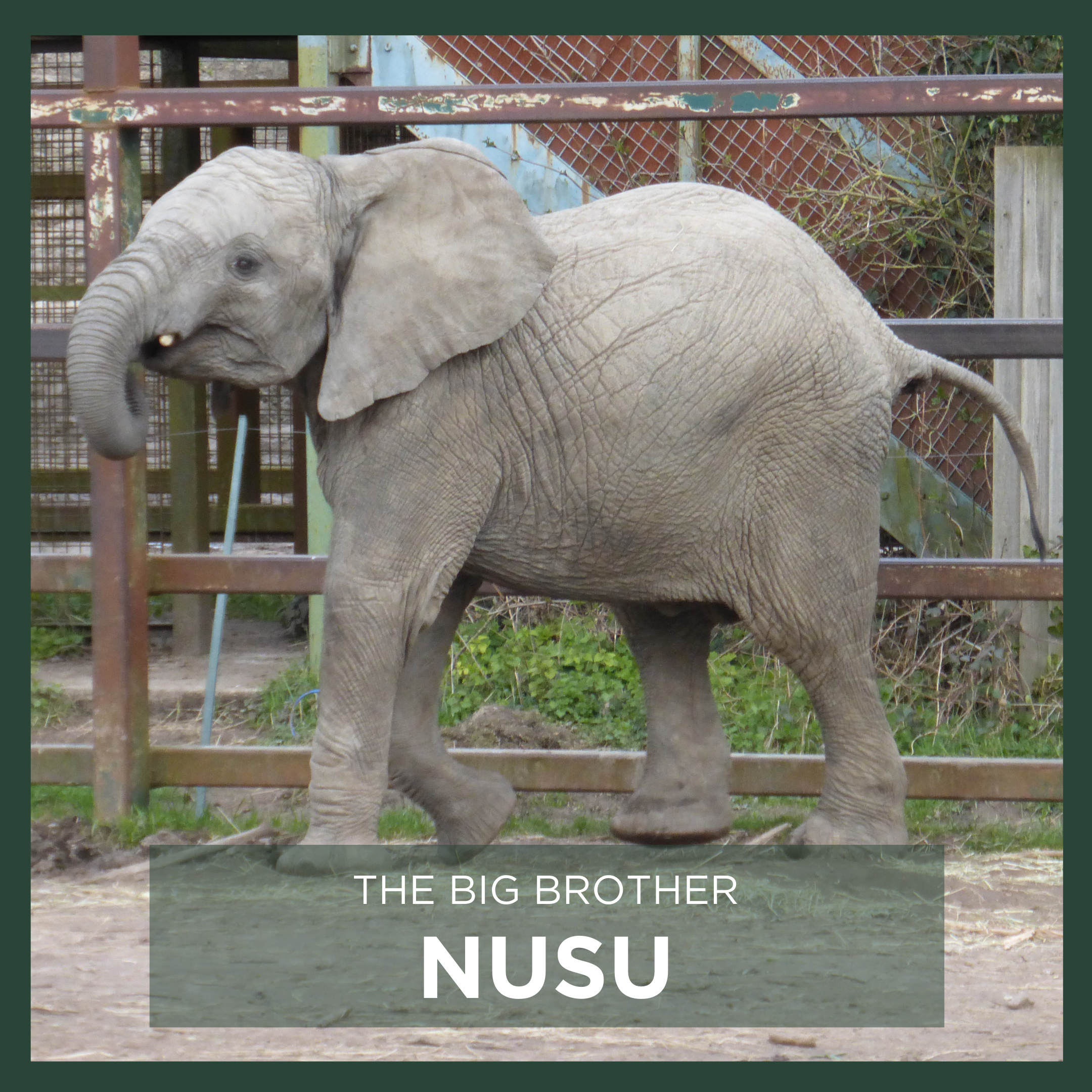 2 year old Nusu is the adventurous one in the herd and enjoys exploring all corners of the enclosure.

He is a happy, cooperative and playful calf who gets on well the others, especially Manzi (pictured bottom left).

Nusu is a confident and calm character like his mother, Jama, and finds it easy to adapt to new situations.

His name means “half pint” in Swahili. 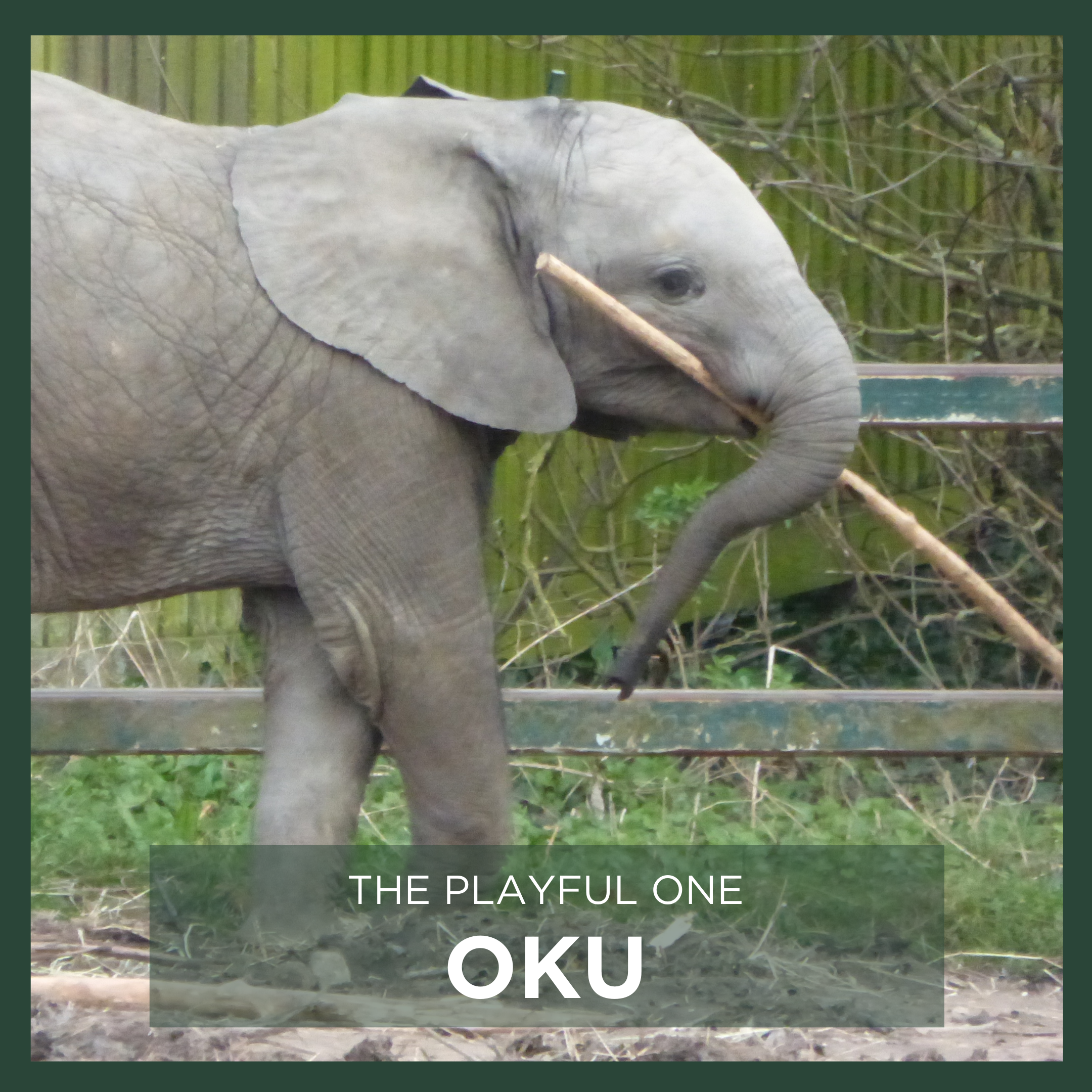 2 year old Oku is a playful character, named after a mountain and lake in Cameroon.

A confident little elephant, he play fights a lot with the other calves.

He looks up to the older bulls, Impi and Mchumba, as his mentors, learning adult bull behaviour from them. 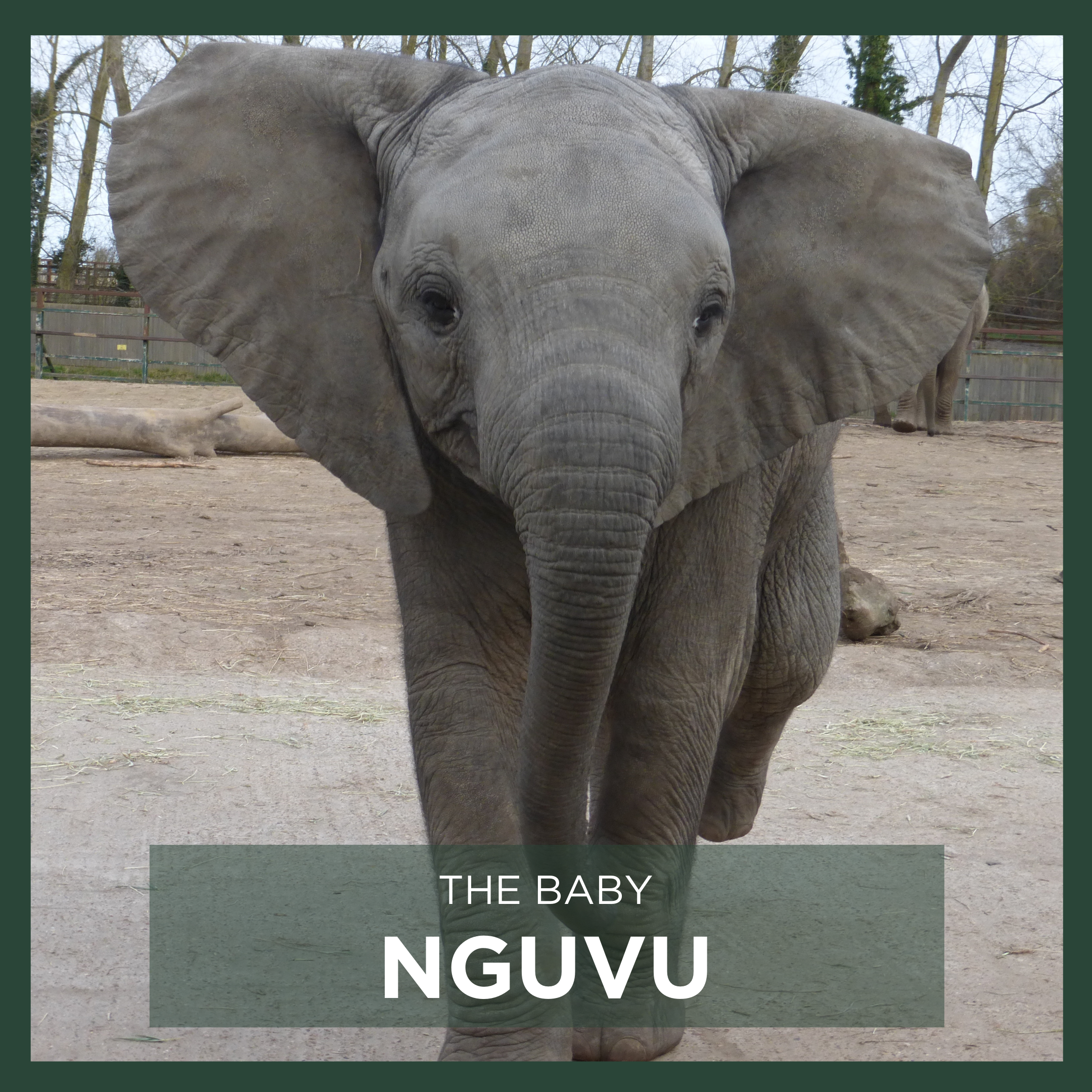 The youngest of the herd, little Nguvu lives up to his name, which is the Swahili word for powerful and energetic or ‘strong as a rock’.

He is a confident, playful young calf with a mischievous and adventurous personality.

He is very close to his mother Etana and enjoys interacting with our keepers and the other youngsters Impi and Mchumba.

Nguvu is a big fan of sawdust enrichment!

Bring your family to see our family at Howletts Wild Animal Park for a great value day out this summer holiday!