Monkey fans will not be disappointed with a visit to Port Lympne this summer as the reserve is home to a massive 15 different species of primate!  You'll be treated to your first glimpse of our primates as you enter the reserve via the footbridge, bringing you eye to eye with our adorable black & gold howler monkeys.

You'll discover the rest of our primates from the cheeky baboons to the agile lemurs as you wander the woodland walkways and check out the open-topped enclosures.  Head Primate Keeper, Jamie Robertson introduces some of his favourites from around the reserve: 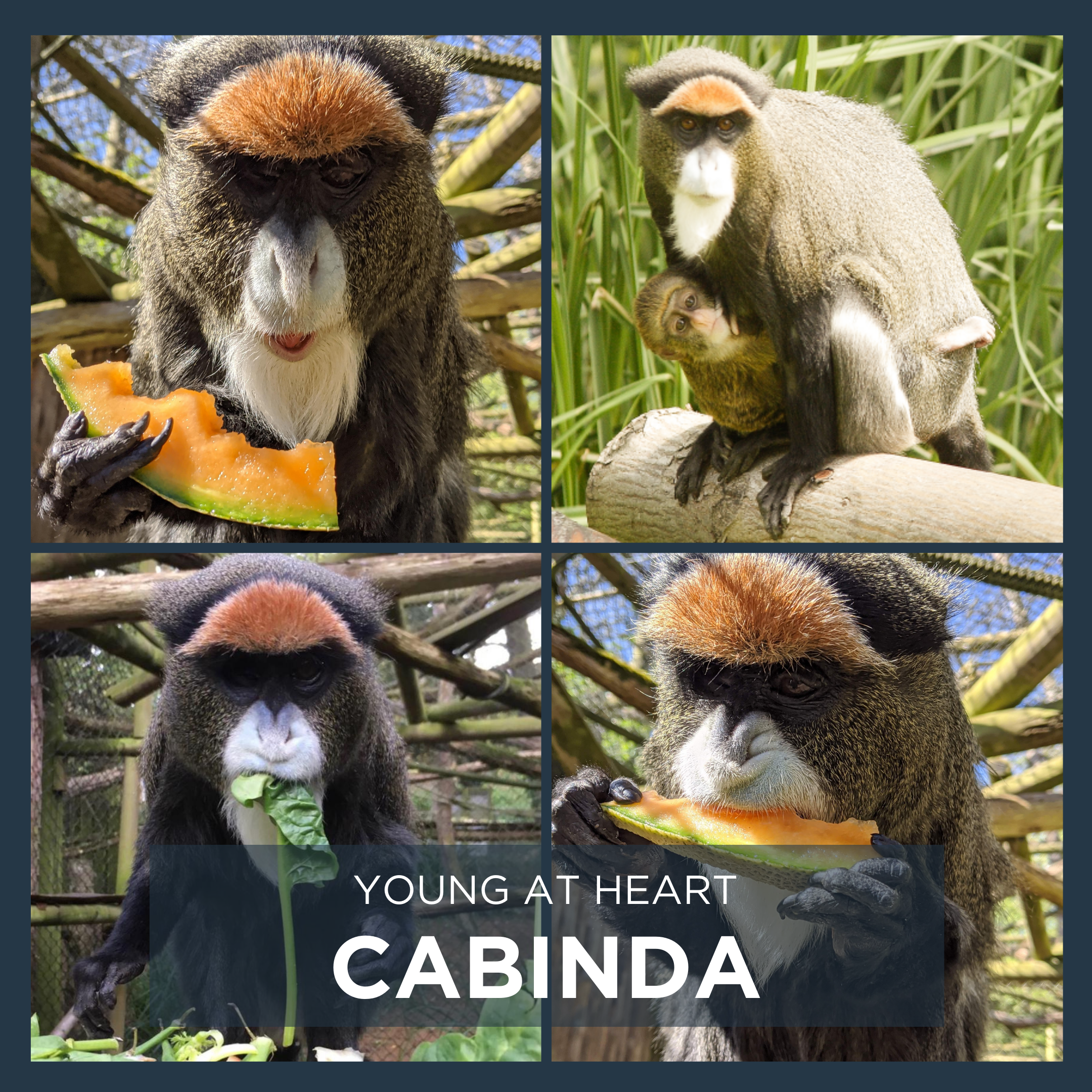 Cabinda has always been a favourite primate of every keeper, vet, and volunteer that has ever worked with her. She was always very small, which sometimes lead to her being bullied off the food by her own offspring. Cabinda never let this bother her though as she is very shrewd, she used to climb onto the keeper’s shoulder while the food was being spread out so she could have first dibs of the food in the bowl. Her favourite food is corn on the cob and spinach. Eleven years ago she damaged her eye, which she eventually lost, but we think she is still just as beautiful.  Even the loss of her depth perception didn’t stop her from climbing around her forest enclosure and jumping through the trees.

She is now over 35 years old, which is an incredible age for a De Brazza. Average life spans are 20-25 years (but we don't tell her that). She is the oldest De Brazza in Europe and, we think, the world. Her great age hasn’t slowed her down and she still zooms round her enclosure.

She was born at Colchester Zoo on the 3rd July 1986 and came to Port Lympne on 11th April 1989 and was paired up with Mr Jorg - who came to be affectionately known as George. They went on to have twelve children together, three of which still live at the zoo - Dora, who lives in the open top monkey enclosure, has had 3 youngsters herself. In total Cabinda has had 12 children, 51 grandchildren, 54 great-grandchildren and 16 great great-grandchildren. Quite an amazing legacy for a very special lady.

She has now moved into a retirement enclosure on the hill below the palace of the apes, opposite the tapir paddock. She lives with another elderly lady De Brazza, Bertha (28yo), from our sister park, Howletts Wild Animal Park. Cabinda only has one eye and Bertha has little pink fingers and toes, so when you’re passing by be sure to stop off and say hi. 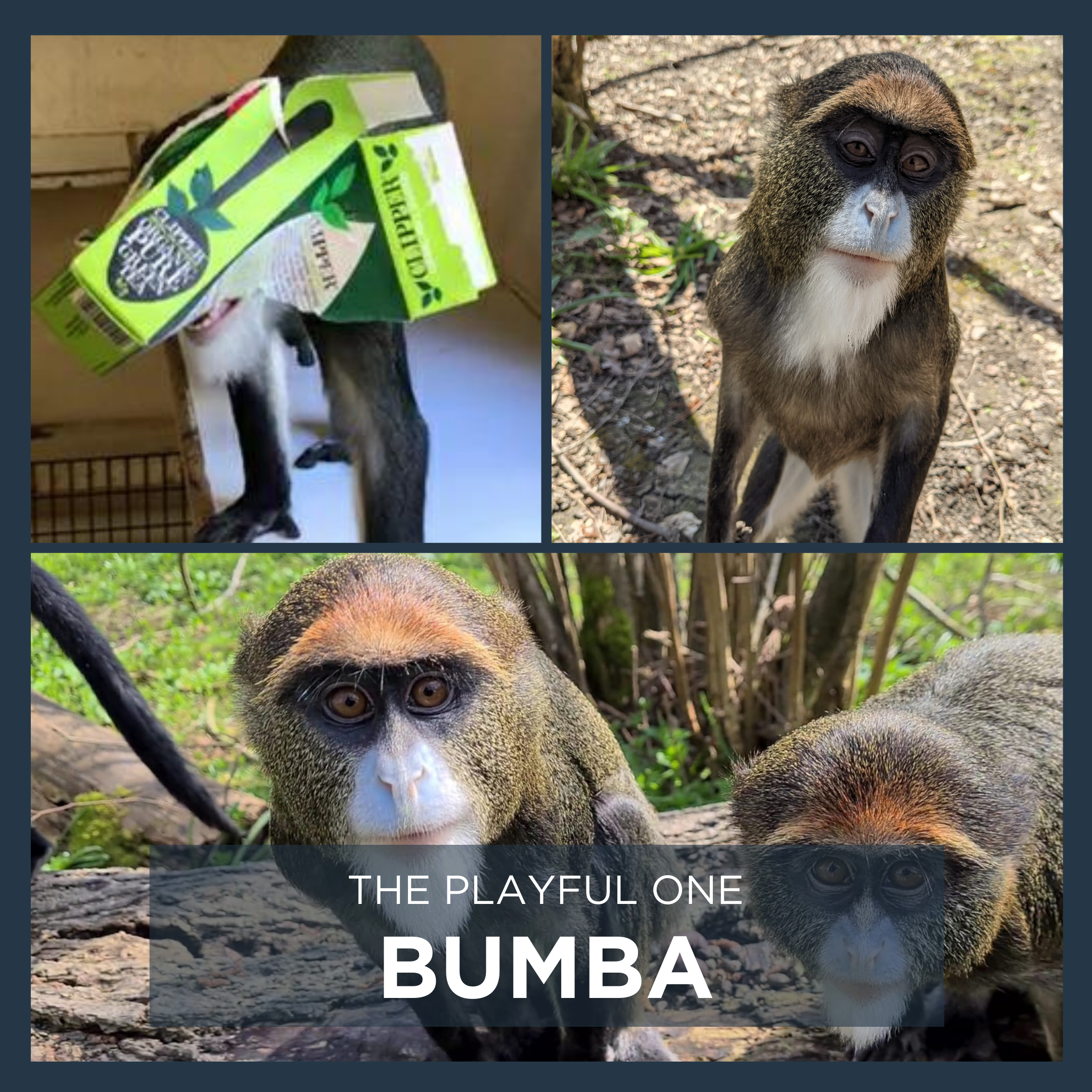 Bumba, another De Brazza monkey, is a favourite of every keeper on the section and many other staff in the reserve because of his playful energy and confidence. He was born at Port Lympne Reserve on 26th July 2018. He’s the oldest son of mum Dora, who was also born at Port Lympne Reserve, and grandson of Cabinda (above), our eldest De Brazza Monkey.

He is extremely playful and loves bouncing off the walls and keepers while they’re cleaning. Anything put down near him is stolen away and carried up a tree. His favourite toys are cardboard boxes, which he likes to put on his head and run round with, bouncing off things. He also likes to rip them up and create the biggest mess possible.

He has two younger siblings: his brother Boda and baby sister Bopi, who he’s teaching his mischievous nature to. Boda worships him and follows him everywhere, despite Bumba being very rough with him. Bopi has only just started coming off mum, but is already trying to emulate her brother.

They live in the open top forested enclosure next to the baboons with our Colobus monkeys, and love to wind them up by stealing their food and grabbing their tails. His favourite food is banana, which they only get as an occasional treat, and he’ll follow keepers around until he gets it. He is the largest of the three young De Brazza’s and is often seen bouncing on the feed benches and through the trees of their enclosure. 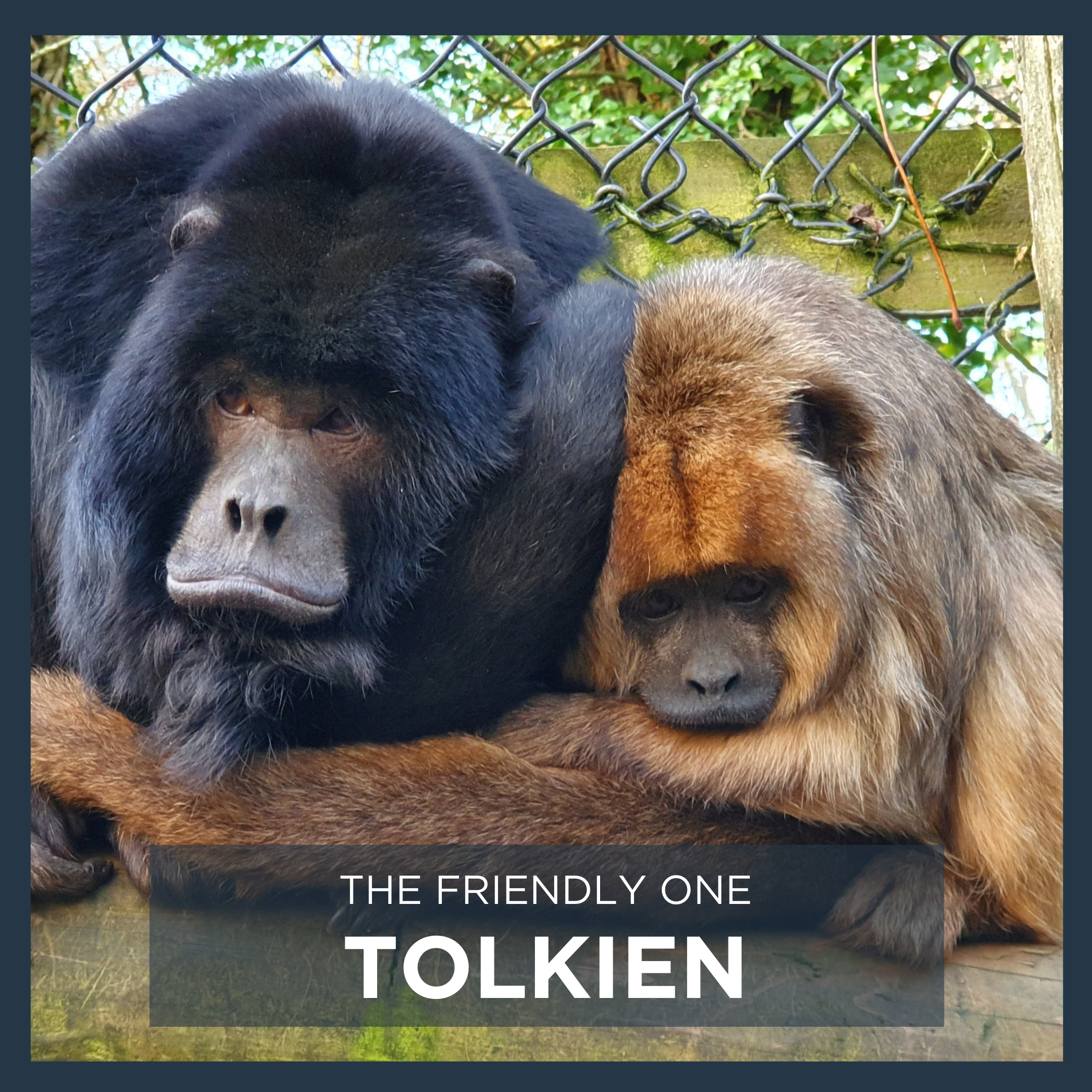 Tolkien is a very special female black and gold Howler monkey. She was born here at Port Lympne Reserve on the 11th May 2001. Even from a young age she loved to interact with her keepers; it started with playing and developed into mutual grooming as she grew up. When she became an adult, she left her family group and moved to another zoo. Unfortunately, she developed cataracts in both her eyes - her new zoo didn’t want to treat her, so she came home to Port Lympne reserve. Our vets removed both cataracts and she adapted incredibly well and became even more friendly to her keepers. She loved to groom through our hair and eventually began to trust us enough to sit on our shoulder and let us groom her back which is extremely rare for a parent-reared primate.

We got her a partner called Clyde, who is absolutely devoted to her, and he is never far from her side. They went on to have six children together, four of whom still live with them today. Tolkien is an exceptional monkey; she has built a such a bond with her keepers that she has passed on to her children - they see their keepers as part of the family and love to play and groom.

Tolkien is found with her family in the enclosure by the gatehouse as you come over the bridge from the car park. She is a golden-brown colour and is usually sat with her partner Clyde, who is black.

Check out these fascinating facts!

De Brazza Monkeys are a species of Guenon that range from north-eastern Angola, Cameroon, Equatorial Guinea (Rio Muni) and Gabon in the west of its range to Uganda, Kenya, and south-western Ethiopia in the east.

This species is associated with riverine forest habitats, generally being found within 1km of rivers and humid forests, swamp forest, semi-deciduous forest, and acacia-dominated forest. They are mainly arboreal. The De Brazza’s Monkey is considerably more inconspicuous than most other guenons as they rarely use group calls and tend to live in small family groups (4-10 on average). The natural behaviour once startled is for them to freeze, and they can remain frozen in one spot for hours.

Conservation Status: The IUCN Red list classifies them as Least Concern. The species is considered generally common and widespread, albeit threatened locally in parts of its range. They are declining in localized areas across its range through deforestation of habitat for agricultural land and timber. They are also hunted for meat, especially in the more western ranges, whilst in East Africa they are killed for both food and as an agricultural pest.

Diet and feeding behaviour: De Brazza’s are primarily frugivorous (75%) but also consume leaves, flowers, mushrooms, invertebrates and other small prey. In the wild, De Brazza’s prefer to eat early morning and late evening. They will come down to the lower canopy and the floor to feed.

Reproduction:  Puberty and the onset of sexual maturity occur in males at around 6yrs of age and in females at around 5yrs of age. They seem to remain fertile well into their late 20’s. Gestation is 177-187 days with a 12mth interval between one pregnancy and another.

Black-and-gold howler monkeys are New World monkeys, which range through eastern Bolivia, southern Brazil, Paraguay, and northern Argentina. Their habitat varies from tropical semi-deciduous forests to tropical deciduous forests. They are sexually dimorphic, which means that males and females look different; males are black, and females and juveniles are a golden buff colour. These monkeys have prehensile tails which are used to grip branches like an extra hand.

The low and guttural sound of howler monkeys is one of the loudest calls produced by any land animal. Under certain conditions, a howler's call can be heard from about 3 miles (4.8 kilometres) away and is used to mark territory.

They typically live in family groups of five to eight individuals. Females will stay with their birth group for life, with males moving out of the group when they reach maturity. The females in the group will share parenting duties, carrying and protecting other females’ infants.

They eat a diet of mostly leaves with a preference for young leaves. However, the howler monkey is one of the only New World monkeys that will eat mature leaves. They will also eat other plant material, such as fruit and flowers.

Black-and-gold howler monkeys are widespread but with patchy distribution. There are substantial populations in protected national parks throughout their range and they are considered to be of Least Concern by the IUCN. The main threat is habitat loss as forest is changed to farmland; soy farming and cattle ranching are the two most important agricultural businesses in the region.

Bring your little monkeys to meet our precious primates this summer for a great value day out at Port Lympne Reserve!